The Periodic Table of Elements & Man-Thongs

Walking home from work last week, I passed a glass-fronted establishment… a restaurant or bar that I see every day and barely notice … and in my peripheral vision, I noticed there was a middle-aged dude shaking what his mother gave him in the window in a strappy, leather, police-man like thong outfit. I didn't get a clear view because I immediately averted my eyes, started to mildly hyperventalate and nearly toppled into the street trying to protect my innocence from said spectacle. Leather man thongs? Only in New York.

That said, moving here wasn't that big of a deal… at the time it seemed like the biggest decision ever and maybe it was. Now, it's just where I live. Yes, it's still the coolest and the craziest place in the world, but it's starting to be less of a daily shock (except for police-thong) and more like home. Another NYC-specific thing I've noticed: the City and its inhabitants are more or less indifferent to me/you/anyone. My hair could be on fire and I could be tribal dancing stark naked on the corner of 51st and 5th… but few weathered Manhattanites would even look up - they might toss me a nickel, though. It happens every day in the Big Apple.

I've suddenly developed a most noticeable southern accent now that I've moved north. In the past, most strangers I'd meet thought I was from Wisconsin and folks rarely guessed I was from Florida. Now I'm drawlin' y'all and sayin' darlin' -- what the heck. Maybe it was the two years in Atlanta?

I love the periodic table of elements. Yes, I realize that makes me an uber-geek. But have you ever really taken the time to ponder its awesomeness? All the elements in the world add up and fit so perfectly into this seemingly insignificant chart -- but more thrilling than that, there are more elements to discover! I love how each one is comprised of a certain number of protons and that's what makes it Gold or Chlorine or Hydrogen or Selenium. And I am in awe of the varied configurations for the elements… how some have similar characteristics and are therefore stacked in a certain way… I'm actually calling myself a nerd out loud now. But, there's hope. Despite this love of the periodic table, I still really, really sucked at Chemistry. 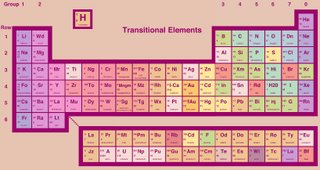