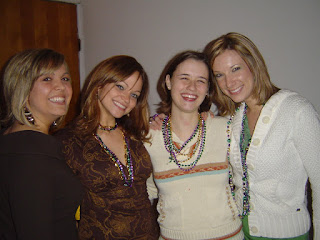 Erin, Jamie, Michelle and I took a mini-vacation on Saturday. I say mini-vacay because I could actually see my apartment in Manhattan from the party in Jersey, but we did leave the island so it’s worth mentioning. Erin's co-worker Johnny Wisconsin had a Mardi Gras party at his super cool new apartment in Hoboken, so we made the history trek through the Lincoln Tunnel and into the Garden State. It was my first experience at Port Authority and my first real jaunt to Bon Jovi-ville, so naturally I was somewhat apprehensive. We ended up having a raucous and unexpectedly hysterical time, and in true Big Apple Angie fashion, we learned some life lessons. This month at church, we’re in the midst of a series called “Inti-Mate, God’s Plan for Waiting, Dating, Mating and Celebrating.” Our pastor Aaron said a few weeks ago, “Some people are single for a season, and some people are single for a reason.” I was hoping I was in the “season” group, but alas, I’ve discovered 10 of the real reasons…

1. You spoke full sentences in abbreviations. “WTF? GSM! OMG! LOL!”
2. Upon arriving at the party, you made a beeline for the brownie tray and didn’t mingle until it was gone.
3. To get the party started, you played “Name that State Capital.” You realized guys aren’t that impressed when you yell out a tough answer like “Carson City!”
4. New Jersey guys are intimidated by your Shakira moves. Your hips don’t lie.
5. When one of the party guests slipped and fell, you and your friends calmly retreated to the kitchen where you proceeded to laugh like hyenas.
6. Every time something funny happened, you said, “OMG, we so have to blog about this.”
7. When Beyonce’s female empowerment jam “Irreplaceable” came on, you and your friends stood in formation, harmonizing a la Destiny’s Child, while pointing “to the left, to the left.”
8. You were so excited with the size of the hosts’ apartment, you lined up and did cheerleading jumps. On the plus side, you’ve still got “it.” Conversely, not everyone understands “it.”
9. You took a nap during the party.
10. Like the island snob you are, you exhaled in relief once you made it back to Manhattan… as if it were safer, cleaner or quieter than Hoboken.

For more information on this and other NYC adventures, please see www.jamielmartin.blogspot.com.

Same to you, my friend...perfection.

You're such a dork.
Love, mom