Though sometimes PR can be tedious, every once in a while, a glorious perk appears to remind me of why I'm in this batty biz. This particular perk arrived in the form of an all-expense-paid weekend trip for four onboard our client’s gleaming new cruise ship. I can't divulge the name of the cruise because that's work-related, but if you really want to know, I'm happy to gush about it in person! 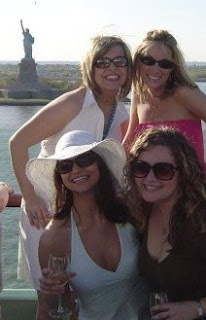 As I mentioned a few blog posts ago, I found out on a Tuesday that we'd be departing that very Friday for our free cruise to nowhere. Jamie, Lauren, Erin and I took half a day off work, met up at the apartment and took a car out to the Bayonne, NJ, cruise port. We were immediately transported into a magical world of onboard surfing, karaoke, ice skating, dancing (a la Dance Dance Revolution), eating and hot-tubbing. I won't get into all the details, because I'm sure everyone is already seething at my profound good fortune, but I would love to share a few highlights and some photos. I will say that we collectively smiled for about 42 hours straight, in between bites of free, all-we-could-scarf Ben & Jerry's, gargantuan buffets, frozen umbrella drinks, free Dreamgirls movie showings in nine languages, unusual Louis XIV musical shows, free surf n' turf (eww, turf!) and two luxurious balcony rooms! After a particularly heinous week, God certainly showed his favor on us when we needed it most!

Whales, you ask? Why in the world would anyone but Jacques Cousteau and Herman Melville care about whales? Well, that's a great question. I'm not sure I have a great answer, but I think I care about whales for the same reasons I love plate tectonics and the periodic table of elements - I am a colossal nerd. On Saturday, we briefly retired to our rooms to rest prior to dinner and rehearsal (I'll get to that in Highlight 2). Jamie and I were doing yoga (Mufasa and souffle positions were especially helpful) on the balcony when the captain came over the ship-wide speaker announcing a pod of whales had been sighted in front of the ship. I spent the next 20 minutes pondering aloud if they were toothed or baleen whales and what the krill population might be in the North Atlantic. Nerdius maximus.

My sorority recruitment video sweetly asked, "Remember the time you did something you thought you never would do?" 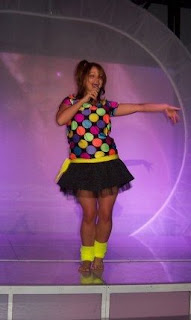 Thanks to the prodding of Erin, Lauren, Jamie and Geo, our cruise staff friend, I did something I never thought I would do… ending up on stage at an 80s party, performing a lip-synch with my own backup dancers to the classic tune, "Walk Like an Egyptian" by the Bangles. I was nervous, doing yoga to relax with the crew in the dressing room. I'd say there were at least 1,000 people in the audience… including my coworkers who were staffing the ship launch, top executives for the cruise line and Juliet Huddy from the Fox and Friends national morning show. It was truly outrageous, and I kept saying to Geo and crew, "How is it legal that you get paid to do this every night?" While I actually do love to sing when I karaoke, I was glad this was merely lip-synching because there was no teleprompter… I kept mouthing watermelon, watermelon, watermelon when I didn't know the words. Please note the included snapshot and try not to use it as blackmail down the road.

Need I say more? Well, I will say a little more. While dancing with one of the young hot English dudes after my Egyptian boogie, I pulled a muscle in my side and ached until Thursday of the following week. I continue to give my chiropractor reasons to mock me. (reference: Parking Meter Incident)

Karaoke innovation! Not only does the ship have a state-of-the-art karaoke bar for time-honored singing fun, but it also has a couple of karaoke rooms… which are similar in size to, oh I don't know, office cubicles. 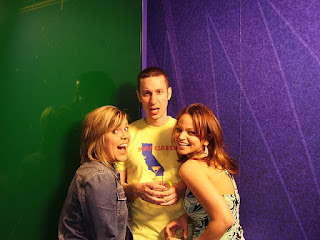 They're enclosed and participants get to choose a song, background and opaque or translucent glass. Then, you and as many friends as you can fit inside all cram into the room, stare at the teleprompter on the wall and sing as you're projected onto a video screen above. For the bargain price of $99, you can then purchase a video of your experience! The Karaoke Room was an interesting if utterly useless innovation… though I understand how a karaoke novice might like to try that first before hitting the stage. I made friends with lots of my acquaintance coworkers this way… 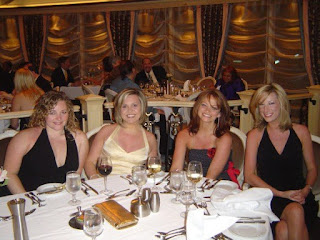 I must articulate that this was by far the most fun I’ve ever had on a cruise… there was no drama, no elongated discussions on what we should do next… just pure, unadulterated enjoyment. I suppose if we’d spent the full seven days onboard that other factors would come into play, like the fact that we only slept about 7 hours over the course of two nights! This ship was the most distinctive, exhilarating ship I’ve ever been on, and I highly recommend it!