NYC is a cultural melting pot. Yay for overreaching blanket statements. But really, how else would one describe this? 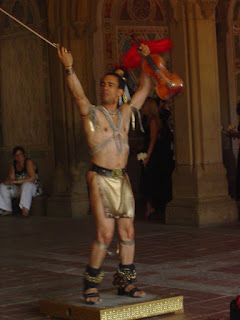 As Jamie and I promenaded down the… well, down the Promenade… at Central Park on a toasty Sunday afternoon, we came across this lively gentleman. We smartly pondered, “wonder what language he’s singing in?” as he whooped an acrobatic aria at the top of his lungs. “Wonder what he’s wearing under that gilded loin cloth?” as it flapped in the afternoon breeze. “Wonder what sort of dance moves he’s doing?” as he stomped and clomped his bell-clad ankles on a raised platform.

Naturally, we presumed he was expressing some sort of Native American tradition, whether Mayan, Aztec, Incan or a North American Native tribe. Alas, our logic was flawed. I dared Jamie to mosey up to the platform to pilfer one of his yellow brochures so we could learn from whence he came.

What we were witnessing was in fact a self-determined “prayerformance.” The singing we heard was called “solopera” (literally, one guy singing opera). He apparently makes up his own words because “language is one of the largest barriers to communication.” I disagree, but whatev. We also found out that he’s from a faraway land “from his dreams” named Farquot or Festoon or something. (Oh yeah, but he’s really from Queens.) He also fancies himself as one of the most spiritual beings on the planet and as a spiritual hermaphrodite. Hey now, this is a family blog… so I’ll just leave that alone.

OH, one more thing. How could I forget? This spiritual being’s name is…. THOTH. Let’th thay it together. Thoth. Yeah, that’th right. Like ‘sauce’ with a lithp. For more info on Thoth, visit his MyTHpace page at http://myspace.com/skthoth or check out the Academy Award-winning documentary (seriously!) on him at your local Blockbuster.