Check out the below guest blog contribution from my zany coworker Dan. He was on the fabulous free cruise we went on a few weeks back, and he describes it a little differently than I do... thanks for contributing, Dan. We heart you!

Not in the sense of “I go to Taco Bell once in awhile.” Not even to the point of saying that Mexican food is my favorite type of food. It goes far beyond that. To me, burritos are not just my favorite food, they are the world’s most perfect food. It’s everything that I like – meats, cheeses, spicy stuff – all rolled up into a convenient and brilliantly simple hand-held wrap. You don’t need an advanced degree in the culinary arts to enjoy a burrito. You don’t even need a knife and fork. All you need are two hands and a heart (maybe even just one hand, depending on the size of the burrito.)

I have even gone so far as to create a life philosophy which revolves around the concept of a burrito, which guides me through all my pursuits (including, ironically, the pursuit of eating more burritos.) I will spare you the details of that philosophy at this time, since it involves some potent and perhaps alarming scatological metaphors. But suffice it to say that all aspects of life can be broken down into small “burritos” of life, which lead to a larger, comprehensive system of burrito-related imagery which shape the very existence of humanity. And if that sounds like some contrived, grandiose b.s., it’s because it is. But seriously – I do have a burrito philosophy, and I’m about to illustrate a brief example of how it works.

Usually when I want a burrito, I have to go to a restaurant and pay somebody some money for one (I’m speaking in both the literal and figurative sense.) But every once in awhile, I get offered a free burrito (again, both literally and figuratively.) Only the fool would turn that down, and my momma didn’t raise no fool (I don’t fully believe this but it sounds confident and provocative.) Recently, a very large and delicious free burrito was offered to me, and I grabbed it, doused it in salsa, cilantro, and hot sauce, and went to town on that sucker.

I’m speaking about a free cruise that I went on a few weeks ago. I guess you could say the ship itself was the wrapping, or maybe the meat, the free booze was the salsa/guacamole, and the people were like rice and/or beans. Or you could say that this metaphor stopped making sense awhile ago and I should give it up. And so I will.

Let me just say that this cruise was awesome. Free food, partying, dancing, video games and all kinds of other crazy crap. And I had the chance to bond with the lovely Angie through an 80s dance party which would likely prevent either of us from being elected president. Here’s a hint – I lip-synched an Aerosmith song with my shirt off in front of 10-15 coworkers and a whole lot more strangers. Actually, that’s not a hint, that’s exactly what happened. All I can say is, “whoops!” And I said some swear words too shortly afterward, but you get the idea. 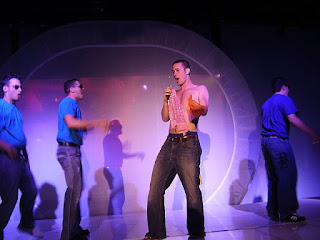 This ship had everything. It had a karaoke bar with personal booths, where for just $99.95 you could purchase the video of you and your talentless friends performing a brutal rendition of a popular song. It had a basketball court where you could conceivably miss a shot so badly that the ball would go into the ocean. And it had me, doing exactly the kind of dumb stuff (see Aerosmith song above) that I always make fun of people for doing at company parties.

My favorite part of the ship, however, was the late-night dance club “The Catacombs.” This was a bumpin’ night club, with the theme apparently being buried underground in stacks of caskets. Or maybe it was some reference to Rome or Ancient Greece. Either way, it had DJ Lighthouse on the 1’s and 2’s spinning the top hits of some indeterminate period of time, to which I took the opportunity to bust out some of my favorite dance moves in front of the aforementioned coworkers and strangers. These moves included the “clap-your-hands-while-bobbing-your-head,” and the “try-a-Michael-Jackson-spin-but-do-it-too-fast-and-end-up-falling.” I was going to bust out a little Irish Riverdance as well, but by 3 a.m. I had forgotten what Ireland even was, not to mention that I’m about as Irish as Michael Jackson (translation: I’m not Irish.) It was crazy to be at a dance party in the middle of the ocean, embarrassing myself in front of a bunch of people when I could have been doing the same thing in New York City for a lot more money. Great success!

In order to “wrap” up this blog, I’m going to bring it full-circle. It’s been a thrill to “meat” you in this format, because any blog besides Angie’s doesn’t amount to a hill of “beans”. Hopefully my burrito philosophy will stick to you like white on “rice”, and your days will be filled with happy dreams of “corn salsa”. It’s lunchtime now, and I need to fuel up before my burrito tank hits empty. Stay hungry and keep eating those ‘tos. (“’tos” is the new street slang for burritos. Or ‘tos I guess. So delicious.)

Great job Dan! This didn't make any sense but I give you an A for effort.

Readers would like to know... where can one find New York City's best 'tos?