So, I saw Tom Brokaw… again. I wasn’t too thrilled about it either. I mean, if I’m going to have repeat celeb sightings, one would hope for it to be someone hip or cool or studly. But no, it was just America’s grandfather having some barbeque at Hill Country last Wednesday night. I was there in celebration of the 23rd year of Lauren, and the food was undeniably tasty despite the ever-loving long wait and the skanky hostess from Hades. Anyhow, Tom Brokaw was there in celebration of his news pal Bob Schieffer, but I didn’t see Bob in person - he was downstairs singing with his bluegrass band. Only in NY, right?

Anyhow, at El Centro on Tuesday night, I was bemoaning over dinner the fact that I’d seen Tom twice and hadn’t seen anyone else cool in ages. Literally, as I was complaining, I saw a guy who may have been famous - but I needed visual confirmation. “Don’t turn around,” I whispered, inconspicuously, I’m sure. “I think Ryan Gosling is standing outside!”

Jamie and Lauren whipped their heads around and wow, Ryan Gosling was in the house. He was bearded and scruffy but it was definitely him. Others in the restaurant began to take notice. It was a joyous occasion, as if God had shown favor by blessing me with a bonafide, Oscar-nominee celeb-sighting. That’s what I’m talking about! Then I noticed that Ereka Vetrini from Season 1 of the Apprentice was also in the house, (totally not a real celebrity) but given my penchant for reality shows and Trump ventures, I count her in my list. Plus, that season was actually good.

I sent in my sighting to Gawker Stalker and was over the moon that I had the opportunity to do so, but apparently, they're not updating the map! Pfft...

Here’s a rundown of who I’ve seen in the past couple of months… not a whole lot! 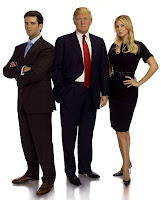 Ivanka (With Donald & her brother)