My time in Bolivia was punctuated by extreme sadness at one end of the spectrum, followed by prolonged bouts of laughter at the other. The team was amazing… I'm actually experiencing withdrawals from being away from them… not so much my roommates Michelle and Robin, who contribute to global warming too much for my nostrils (entiendes?), but definitely everyone else. 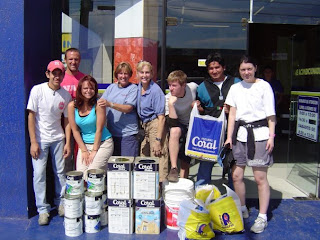 I'll try to hit a couple of highlights here for your giggling pleasure, but I can't guarantee you'll laugh as hard as I did… (I'll add accompanying pictures next week as I get them)

Bits & Cream
It's everyone's favorite ice cream shoppe with incorrect orders guaranteed or your money back. Seriously, I have never once in three years received what I ordered. But it's so magnificently delish anyhow - and like $1.50 for all the tasty mix-ins you could want. I recommend white chocolate ice cream with white chocolate chunks, oreos and caramel sauce. I also learned a useful phrase from Rob, "Don't cheat on Bits." The one time we did try another dessert establishment, he was proved correct… they actually managed to screw everything up worse than at Bits & Cream (not to be confused with my favorite Skittles commercial - Berries and Cream.)

Futbol, Football & Rugby
The day I hurt my knee… first, playing futbol (soccer) was exhilarating, but those little barefooted Bolivian girls are hardcore! After the 20-0 stomping of Team Bolivia vs. Team USA, we decided to show them a thing or two about real football. It was a winning idea in theory, however, Bolivian kids don't understand what it means to be "down" after a play. So, imagine catching the ball and running toward the end zone, then being tackled by about nine kids. But you're not done yet. Bolivian kids think that is the perfect time to punch, kick and tickle the crap out of you until they strip you of the ball. Then they run it back for a touchdown as you stand, stunned and gasping for air. So yeah, I hurt my knee wrestling in the dirt with elementary school kids.

Poker
Late one night, we played poker using Emily's deck of uber hip, fluffy white poodle cards. We bet in three different currencies: Bolivianos, dollars and Bulgarian whatevers from Robin's trip a few days before -- oh, and desserts. I pitied Michael when he went "all in" and lost his cheesecake to Emily, but she didn't have any qualms about eating the entire thing right in front of him. Awww, snap.

The Menu
I didn't eat anything too weird this year, in fact the fried chicken wings at Los Lomitos was a delicious new addition to my Bolivian comida repertoire. Los Lomitos www.loslomitos.com offered such menu items as Roasted Fish Meat to a Crisp, Wild Pigeon and Quail Eggs - but I had Surubi, which is fish from Lake Titicaca, seriously! Some other folks on the trip were more adventurous… JP and James ate cow udder, and the "udderly disgusting" jokes lasted a while after that. Things got awkward when James asked JP to milk him following consumption of the udder… They also chowed on chicken hearts, yum yum. Of course we had our usual to-die-for BBQ Chicken Pizza at Eli's New York Style Pizzeria and mountains of cheese rice and yucca. I maintain my previous statements that Bolivia is the only place one can go on a mission trip and come back fatter.

"Cuantos anos tienes?"
"Dude, you just asked that kid how many anuses he has!"

"Marlene, you're just so strange and weird… I mean, in a really good way!"

"Angie is the friend who isn't afraid to say inappropriate things or to dance in the street."

"Robin: Hey guys, what are you doing?"
Angie: I'm gonna go down to the hardware store and get some glue so I can sniff it.
Robin: Cool. Michelle, what about you?"