"You Cooked Your Foot"

I wouldn't be Big Apple Angie if I didn't periodically get injured. You've probably heard me whining over the past few weeks about my heel, and if you haven't, you're in the fortunate minority. After tedious tests and doctor visits, it appears I have a calcaneus stress fracture, which in layman's terms means "I'm gimping around like a drunken lumberjack all over New York City, sporting a cumbersome and thoroughly hideodorous $250 boot because I fractured my heel, allegedly because I work out too much." Whine and cheese.

No matter. I had a pity party Monday night after I picked up the costly new orthopedic boot, got all the tears out, and now I'm moving on and searching for the silver lining. God is always telling me to SLOW DOWN, and I wish it didn't take car accidents, parking meters and broken heels for me to get the picture. 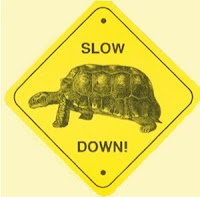 As I do with most situations, I shall now make a handy list of pros and cons designed to make me feel better about my predicament.

Cons
Getting around a "walking city" like NYC with a ginormous boot on is a beast
No trampoline or dance classes for at least 6-8 weeks
When I go up and down the metal stairs in my apartment, it sounds like the Tin Man is suicidally hurling himself into the basement
I did not have an extra $250 to spend on shoes, much less one shoe, much less an atrocious orthopedic device
Being hurt makes me homesick and pouty
My roommates are calling me "Bootsie"

Pros
At least it's not snowing - you know I can barely stay upright on two good feet in the snow
Maybe if I pout I can score a sympathy date or two from some hotties
Better a boot than a cast - I'm going scuba diving for work in two weeks
Better a boot than crutches - I would still be pity-partying
The boot can be improved upon... I'm strongly considering purchasing a Bedazzler
Perhaps people will give me a seat on the subway
At least I can remove the boot to shower and sleep
Mom gave me some $ to offset the cost, and the boot store called and gave me a $62 discount the next day (I think it's because I cried excessively.)
I can make up exciting stories about what happened:
A. My pet wombat mauled me
B. I was saving my dog from a forest fire (darn, already used that one)
C. I was injured during production for my new music video
D. I tussled in the Club with Lil Kim, and she's way more hurt than me
E. I burned my foot on a George Foreman grill

Wow, I feel better already. Oh, the power of listmaking!

QUOTES OF THE DAY
Michael Scott: Doctor, what is more serious, a foot injury or a head injury?
Doctor: A head injury.

Michael Scott: I enjoy having breakfast in bed. I like waking up to the smell of bacon- sue me - and since I don’t have a butler, I have to do it myself. So most nights before I go to bed I will lay six strips of bacon out on my George Foreman Grill. Then I go to sleep. When I wake up, I plug in the grill. I go back to sleep again. Then I wake up to the smell of crackling bacon. It is delicious. It’s good for me. It’s the perfect way to start the day. Today I got up, I stepped onto the grill and it clamped down on my foot. That’s it. I don’t see what’s so hard to believe about that.

This is the perfect way to have multiple suitors approach you at the bar with an easy icebreaker. Way to be dating proactive, BAA!