Hot Men, Delivered to Your Door 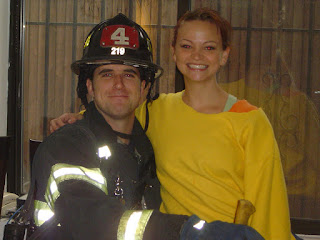 As some of you know, my little sister fainted at school a few weeks ago. She told me about the half dozen manly paramedics that showed up, and how after they’d seen in her chart listing her 26-year-old sister as an emergency contact, they wanted to know if I was single. This got my wheels turning… what if dating experiment Part 4 (or whatever part I’m on) was calling 911 and feigning illness in order to see what kind of hot single firemen were around? Hmm. The idea had merit, though it was irresponsible, careless and ultimately illegal. I never got around to really planning it out. And then today happened.

This morning -ok at 1 p.m.- the four of us Apt. 1E gals were sitting around having our usual weekend catch up… eating breakfast/lunch, lazing around in sweats, laughing about fitness guru John Basedow being at Amy’s fashion show and just generally goofing off and giving each other a hard time. Kelly ran out to get a sandwich, and 30seconds after she walked out the door, she called my phone to tell me she had just let a firefighter into the building and there was a fire truck out front. A little concerned but mostly just nosy, Erin, Amy and I opened our door into the main hallway and lo and behold, there was a fireman standing right outside. I think he may have been a little startled by the three of us eagerly peppering him with questions as soon as we flung open the door, but he reassured us there was nothing to worry about, that some idiot in our building had called 911 because a toilet from one floor up was leaking in his apartment. Then he started telling us crazy stories of stupid things people call 911 for… dead batteries in the smoke detector, other plumbing issues – it was like having a stand-up comedian come to the door. So Amy, Erin and I just stood at the door laughing (unimportant side note: I was eating a pear) and shooting the breeze with Firefighter #1 for about five minutes. At some point, after mocking stupid people for a while, he asked if any of us were single.

It didn’t occur to me that clad in sweats and completely unsexy pjs, we looked like 5s instead of 10s. “Heck yeah, we’re single!” burst forth from my mouth and I started peeking my head expectantly around the corner. So Firefighter #1 radios, “Guys, we’ve got an issue in Apt. 1E.” The next thing you know, there are no fewer than seven fully geared up fire-hotties standing in the hall outside our apartment. We chatted about the Gators (thanks to Amy’s sweatpants) and where we’re from and whatnot. Then I decided we HAD to have photos with the fire-hotties in our apartment so they all came in. They let us wear their helmets and hold their axes! We talked about how much we pay in rent, how many bedrooms we have, how we’re all Gators – and the best part is there were hot single ones! Then Kelly came back, opened the door, and said, “Please tell me what in the world happened in the 10 minutes I was gone?” Her face was priceless. 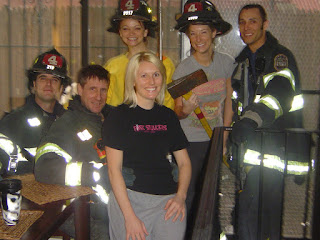 And for the record, I was right. Hot chiseled men really will show up at your door if you’re patient enough!

Probably the best story I've ever heard in my life, ever. Unfortunately Ang, when you talk about looking like a 5 in sweats...you're talkin' crazy!!!! Because your ability to rock sweats is somewhat different from most people's. [I'm assuming you were workin' that '80's look] =]

You seriously rock at life...times a million.

This is great!
Jordan

This is hilarious Angie! Such an appropriate Valentine's story for single women. We miss you. Erin