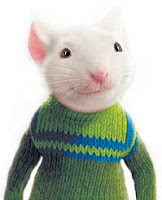 MARCH 13, 2008 - NEW YORK - Stuart Little was found dead today in a gritty section of Manhattan's Hell's Kitchen neighborhood. Homicide investigators are working around the clock to determine if foul play was at hand.

Hell’s Kitchen resident Amy of Apt. 1E was the first on the scene. At approximately 12:30 a.m., Amy smirked when she saw Little’s lifeless naked body sprawled conspicuously on her welcome mat, thinking she was being “Punk’d.” Amy recruited roommate Erin to help determine if Little was in fact real, and then if he was in fact, dead. Sadly, Erin was able to use past rodent experience to confirm both facts.

Erin and Amy’s distraught cries of terror awoke another roommate at 1E - Angie. Irritated at being disturbed in the middle of a dream about Jason Castro from American Idol, Angie was called out from her bed to the kitchen, where she was encouraged to open the front door.

“I couldn’t believe it when I opened the door and there he was, in downward-facing dog position on the mat,” Angie told reporters. “Frankly, we’re concerned for our own safety. This has all the makings of a hate crime against hot girls.”

Many questions remain unanswered in this bizarre case. No suspects have been taken into custody, though investigators have named multiple persons of interest based on interviews with neighbors. Whether Little’s death truly was a hate crime aimed at an apartment full of hotties, a senseless act of dog/cat on mouse violence or simply nature taking its course, many Hell’s Kitchen residents are taking extra precautions to ensure their safety.

For now, hundreds of Little’s vermin children are left to mourn his legacy and to celebrate his short, and small, life. 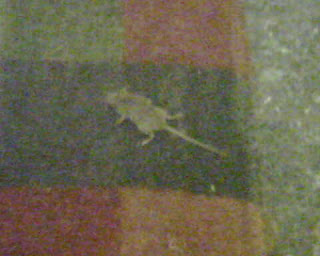 His tombstone shall read: