Remember before I left for Tiamo how I said, "How many celeb sightings or outrageous experiences could I possibly have from my private beachside bungalow?"

The answer: Quite a few! 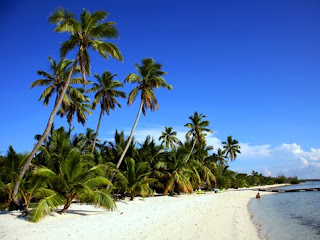 Outrageous
Apres dinner one night, we gathered around the toasty bonfire created by Steve, the charming Australian nature concierge. As we chatted cordially with guests and journalists alike, I heard a loud rustling in the palms above. The ruckus continued, and I presumed a coconut was headed straight for some guest's unfortunate noggin. "Heads-up! Coconut!" I called across the flame pit. Just then, a giant black turkey vulture crashed down out of the fronds, wings spread six feet across - into the fire! Every last bonfire participant took off running, flailing and screaming into the night as the vulture sat perplexed in the flames. He was gone (perhaps a bit roasted) before we returned to locate our shoes and beverages that had spilled into the sand as we ran.

Celebs
Not that I saw him, but I was informed as soon as we returned to Fort Lauderdale that Jimmy Buffett had landed at Congo Town just as we were preparing to depart. I noticed his plane immediately - bright blue and yellow, old school, so pimp! But wouldn't know Jimmy Buffett from Moses … well actually I would prob recognize Moses. At any rate, there was a celeb, I just missed him! 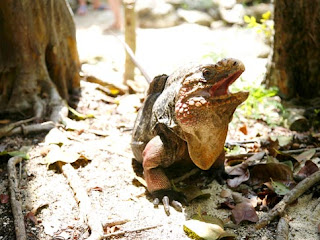 Aside from the suicidal turkey vulture, the rest of our creature encounters went pretty smoothly. I saw a baby barracuda nab a teeny silver fish right on the shore, encountered lots of stingrays (taught my journos how to do the Stingray Shuffle) and orange starfish as big as your head, free-dove down into a blue hole to see a 7-foot nurse shark (wimpy shark) and marveled at the bioluminescent plankton that made the bight sparkle at night. (Basically the same concept as fireflies… just in the water.) Not to be all Faith Hill, but it was magical. The morning we left, we ditched breakfast to watch four dolphins playing in the bight just in front of our beach. And I did see one iguana, maybe 3-4 feet long, behind my bungalow. Awesome!
Bungalow 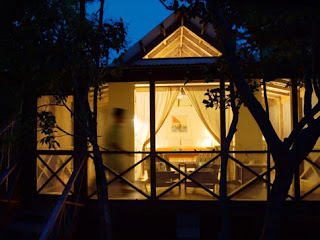 My bungalow was charming! For being an eco-friendly resort powered by solar panels, I never felt like a crunchy tree-hugger. The resort was both luxe and rustic, with a sublimely cozy bed and plenty of hot water in the shower. And let me say that the Island of Manhattan and South Andros Island are only similar because they're islands. There were no roads, cars or angry people, and I didn't have to wear shoes at all. During the day, it was sunny, breezy, peaceful and warm and at night it was cool, dark and positively quiet. It's the first time in a year I've been able to sleep without an eye mask and ear plugs, and waking early to the sounds of birds in the trees, water on the beach and rustling palms was the epitome of paradise.

Dance Parties = Inexplicable Bruising
Friday night, our relaxing retreat turned into a raucus dance party. We shook our laffy taffy, supermanned that hoooo (not really, ewww) and made sure everyone knew that our hips don't lie. (Note to Bev B: I crump so much better when not subject to scrutiny!) The journalists, the staff, the guests and I danced all night (or until 11, I didn't know what time it was all week) and I was eventually dropped off at my bungalow by the youngest guest who said, "Honey, it's time for you to get some sleep." This was in response to me announcing, "Come on everybody, we're going streaking in the quad!" Okay, I really just suggested we swim in the bight, but streaking in the quad is funnier. Upon waking on Saturday morning, I noticed a massive - and I mean massive - bruise on the inside of my leg. All week I claimed that I was mugged on the way back to my bungalow, but like I said, this place is nothing like Manhattan so that was an unlikely story. My bruise will remain one of the great mysteries of life. 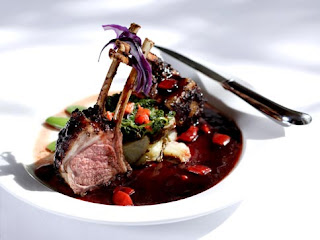 The food was so tasty, my mouth is still watering for it. Chilled avocado soup, mango chicken, Bahamian mac n' cheese with crab mousse stuffing, empanadas, jerked lamb, mahi, lemon sorbet with dill, banana flambe, banana pancakes, ceviche, crab cakes - it just got better and better every day. And the entire staff was beyond friendly, the kitchen crew so talented and warm and nice… Now I'm just rambling. I'm longing to get back there ASAP. Who's in?

I just finished reading the last 6 or 7 entries. Very exciting, very interesting. You write a great blog (the kind that makes you keep reading :) )