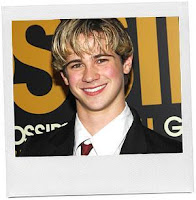 I have a knack for spotting celebrities even though I don't actually know who they are or what show they're on... it's my gift and I'm proud to own up to it. So as I passed this skinny kid while walking near Madison Square Garden Saturday night, I dialed up my little sister thinking he must be some Disney Channel prodigy. As soon as I got her on the phone however, I remembered that he was one of the Gossip Girl cast members... a show I've seen maybe twice - and neither episode had him in it. At any rate, he's on a hot hit show so he counts as a celeb.

Note to readers: I may start keeping a tally of total celebs seen while in New York -and while I'm at it, I think I'll create a wish list of sorts to keep me on track. If you could spot one celeb, who would it be?