Here's something I thought I'd never say in my blog: this week has been full of public nudity.

It was a beautiful Saturday morning in the city. MHS Cheerleading pal Morgee was in town visiting from Athens, Ga., and she, new roomie Rachel and I decided a jaunt to Central Park would be the perfect way to spend the blissful day. Upon reaching the southwest entrance of the park at Columbus Circle, we noticed a group of apparent protesters with signs amassing on the grass nearby. Curious, we headed toward the fracas and saw not protesters, but a gaggle of half naked ladies.

It appeared I'd unknowingly lead sweet Southern Morgee and brand new New Yorker Rachel right into a rally for National Go Topless Day, where about a dozen women of all ages were lounging on the grass, sporting feathery angel wings, underpants and nothing else. With all the naked parts flapping in the breeze, it was like a live action National Geographic article. 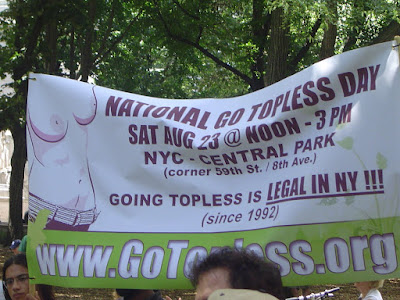 The Boobie Patrol's fearless leader was reading a 10-point manifesto on why toplessness is splendid, how oppressive it is for a woman to wear a shirt and how women have the right to bare their chests anywhere they want - just like the evil men of the world. I believe she used the term "nipplephobia" to describe the crippling fear affecting many Americans. Egads! Nip-ple-pho-bia! (side note: how many weirdos are going to find my blog now because they're Googling things they shouldn't?)

According to gotopless.org, women who dare to be topless in the US are repeatedly being arrested, fined, humiliated and criminalized. And this is a surprise, why? If I want to feel like an empowered woman, I'll run for office or break through the glass ceiling or lobby for women's rights or something. Brazenly parading our lady junk on New York's public thoroughfares will encourage car accidents, not women's equality. Our shirtless friends think that's a Puritanical, uptight woman-hating point of view, and I guess they win, because it's been legal to share one's naked top half anywhere in NYC since 1992.

After reading the end of the ta-ta manifesto, one of the participants wailed some piteous song - presumably about the subject at hand, or chest, but I couldn't understand because it was in Hebrew. As the rest of the Boobie Patrol swayed in Kumbaya style, angel wings aflutter, the leader dramatically encouraged everyone to stick it to the man by discarding their shirts immediately.

The result: three teenage boys enthusiastically ripped their shirts off in solidarity. The rest of us stood bewildered - except for the one entranced old guy who gazed at the participants in a stupor, grinning from ear-to-ear.

As you know, I usually don't like to use B.A.A. to make any strong personal statements because I don't want to offend my broad audience... but standing around in your underpants with your nonnies hanging out doesn't scream female empowerment - it screams, "Ta-dah! I have nonnies! Look at me!" And you know what? Embrace that exhibitionism if that's your thing. Hit up a nude beach if you're so inclined. But don't try to pass off enthusiasm for flashing people as a pious attempt to help the women of the world to overcome oppression. Only a true boob would sink so low.

Stepping off soapbox with my top firmly on... In other news, I was sorta accidentally naked in public Tuesday morning. Stay tuned for that debacle.