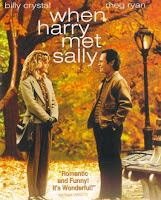 Whether you are vehemently opposed or wholeheartedly in agreement with this statement (and with Harry's assertion below), I'd like to hear from you for some research (err, thinking) I'm doing about pseudo-relationships.

First, props for quoting the best movie of all time.

If a guy is interested in a girl, and she is interested in him, it will happen...in a relatively short amount of time, without a lot of questions or drama. On this note, I remember watching an interview with Nora Ephron on the special features of the "When Harry Met Sally" DVD where she acknowledged that Harry and Sally's story is not usually how real life works out.

The good news is, though - when we walk away wisely from pseudo-relationships, we open ourselves up for the real thing!

OK this is a really long post...I won't be offended if you don't approve it, haha! Just don't delete. :)

I feel like I don't agree with Harry and because I can't figure out why, I have erased 2 potential comments. I will keep you updated if I have a revelation.

I have to say I agree with Harry! And for any woman thinking she can have a "boy-toy" and nothing more ... well I say stop by Walmart and spend $9.99 on Vanilla Sky! (It's all great in theory!)