Hike Your Face Off

We landed in Minneapolis yesterday morning after an exceedingly uncomfortable 9-hour redeye on Northwest, AKA Crap, Airlines. It was three degrees and snowing, and guess what? Hodgie has never seen snow! He got off the plane, looked outside and said "This is the best part of the whole vacation." Dork.

One day when I'm less perturbed, I might write about how crummy my NWA experience was... just to give you a little taste (pun intended), NWA charged $10 for a disgusting dinner of stank nasty sandwich and inedible pasta salad. When I scoffed at the price, the flight attendant swayed me with promises of a Twix bar inside. Dude, that Twix was fun-size! Not even a full two bars... not even one full bar! If I was ticked then, I'm even more so now, as I've been back in NY for 36 hours and I still don't have my luggage, which naturally includes chocolate covered macadamia nuts that I want to eat - NOW.

Alas, you dear readers prob don't want to read about my candy woes, so on to the point: more pictures of Hawaii! I'm in the process of putting together a slideshow of the best pics, so stay tuned for that. I'm also trying to figure out how to upload our shark cage diving DVD which will surely impress you enough to tattoo my name somewhere on your body. So get excited for that.

As you know, Hodgie and I were really excited about our eight-mile hike on the Kalalau Trail on the Na Pali Coast of Kauai. We'd been talking about it for weeks and we had it all planned out. We woke up super early, drove to the end of the road on the North Shore and took off for Hanakapiai Beach and Falls. According to the Web site: "The Na Pali Coast is a very special place. The pali, or cliffs, provide a rugged grandeur of deep, narrow valleys ending abruptly at the sea. Waterfalls and swift flowing streams continue to cut these narrow valleys while the sea carves cliffs at their mouths. The Kalalau Trail provides the only land access to this part of the rugged coast. The trail is graded but almost never level as it crosses above towering sea cliffs and through lush valleys. An unmaintained 2-mile trail into Hanakapi'ai Valley leads to a waterfall. After crossing the stream about a mile up the valley, the trail becomes more difficult as it meanders over rocks and fallen trees. The upper half of this trail should be hiked only in good weather to avoid dangerous flash floods and falling rocks."

According to the Sierra Club, this particular hike ranks a 9-out-of-10 for difficulty, and readers, the Sierra Club is correct. Hodgie lead our intrepid trio during the first 2-mile leg (new friend Rick came with us) and we made it to the first stop in about an hour. We stopped for a quick snack at the dangerous beach and then set off for the 2nd quarter - the hike up the valley to the falls. Valley makes it sound so friendly... this valley involved climbing vertically over massive boulders and traversing the rapids multiple times. The pain was SO worth it. The falls were stunning and we were the first people to get there that day so we had the place to ourselves. After a tasty lunch of pb&j and Uncle's homegrown tangerines, it was time to swim under the waterfall... brrrrrr. 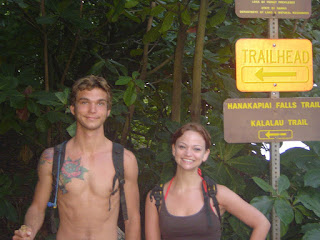 8:15 a.m. The sign warning hikers not to swim under any circumstance - and you know what, it REALLY was dangerous 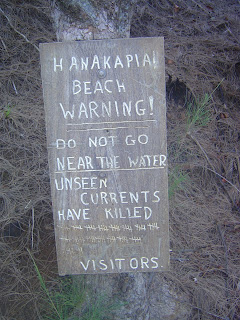 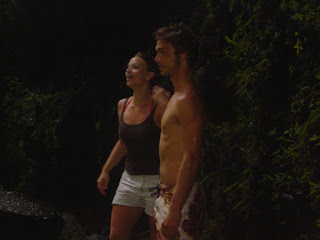 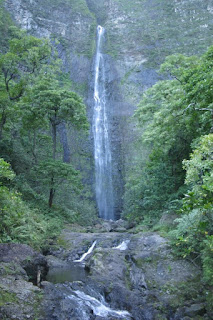 10:15 a.m. To get the best vantage point of the falls and surrounding area, we climbed vertically 'til we got to this spot 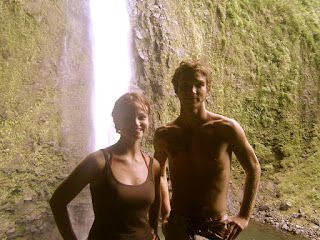 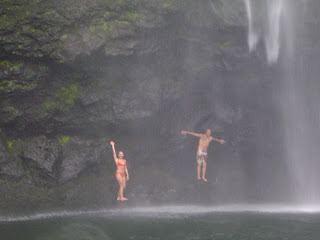 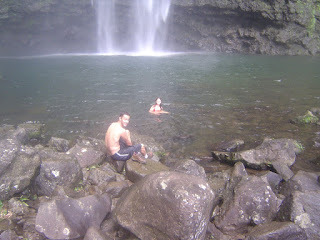 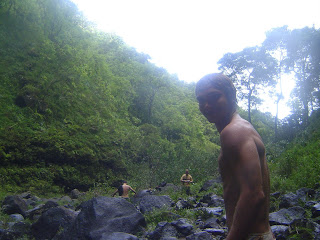 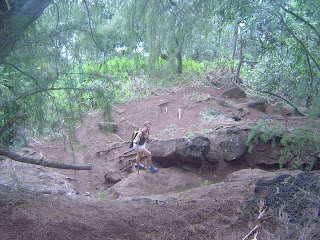 After the hike, we planned to nap the rest of the day away, but my muscles were so worked up that I was too hot to sleep. I had to ice my entire body just to go to bed, but that was only after Hodgie and I wandered around the condo in incoherent, waking comas for the rest of the afternoon. I don't remember much of that evening. But like I said, it was SO worth it!