The Randomness That Is BAA

Hello daaahlings! How's everyone? Time for a down and dirty recap of all things BAA.
1. We just won some new biz, thus I've been kicking butt and enjoying train rides and meetings in Connecticut. Favorite song to listen to on the train: 20 Years of Snow, Regina Spektor.
2. I've uploaded the full Today Show clip from our Best Job in the World adventure on Australia Day. It's no BAA as Sarah P., but it'll play. Matt Lauer and I had a nice off camera heart-to-heart and he was a gem, really. Enjoy!
3. I accidentally stayed out until 11 a.m. Saturday night, errr, Sunday morning. Am I too old for this? Yes. When will it stop? When someone domesticates me, I suppose.
4. I leave for Beverly Hills on Thursday, huzzah! The boss man surprised cohort Erica and me with VIP access to the Tonight Show, but we will have to change our flights to get there in time for the taping, and it's looking wicked expensive. Booooo! Anyone feel like donating to a good cause? ...the cause of me potentially meeting some fantastic celebrity, falling in love, getting married and being on the cover of US Weekly? Pretty please?
5. If you haven't seen my video application for Best Job in the World yet, check it out here. It's still not uploaded to the official site, because the Tourism Queensland folks (bless their overworked hearts) are wading through thousands and thousands of videos. I'll let you know when I finally make it. I'll be doing a jig for sure when that happens.
Big Apple Angie's Quest for Queensland from Angie Orth on Vimeo.
6. Was anyone else concurrently horrified and awed by 9-month pregnant MIA's performance on the Grammy's last night? She was jumping up and down in that crazy bumblebee getup, and I had the worst feeling she was going to pop that baby out on stage with Kanye and Jay-Z. That would make the Grammys memorable, wouldn't it?
7. It was almost 50 degrees this weekend. If I was still a Florida girl, I would think that was freezing. Instead, I wore only one layer of clothes and was a little toasty. Ah, spring.
8. I've been following some interesting new folks on Twitter... Demi Moore, Ashton Kutcher and Perez Hilton. I've been disproportionately concerned about Perez's harassment of Demi/Bruce spawn Rumer Willis... just saying. It's sort of outrageous.
9. Anita's coming to visit at the end of the month. Yes, yes, yes!!!
10. Rewind to Friday night. Lauren and I were at a loss for a fun activity that wasn't too outrageous or costly. So in honor of my recent Australia efforts, we hit up Outback for some tasty, if wholly unauthentic, goodness. Then en route to Pinkberry, we came across Gossip Girl filming live on 55th and 2nd. Excitement! We watched scenes with Lily and Rufus and Taylor and Penn - sorry, I confuse their real names with their show names. Fun fact: Taylor played Cindy Lou Who in the live action Grinch with Jim Carrey. 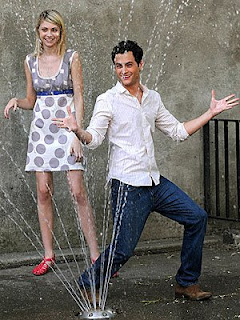 11. My mom's coming to visit for her big 5-0 birthday celebration. We'll be staying out until 11 a.m. fo' sho'.
12. LJ and I made friends with the Gossip Girl extras, so we're going to apply to be extras at the casting agency. How fun would that be?
13. It's that time of year again - the Westminster Kennel Club Dog Show is this week at Madison Square Garden. I had brunch with Jane from back in the dog show days on Saturday - always fantastic catching up with her! Did you know my frequent trips to NYC for Westminster are what lead me to want to move here in the first place?
14. I'm joining a new small group. It's been almost a year since I was in one.
15. Check out the deleted scenes from my application video. It was cold and I was wear flippers, not shoes. The things we do for love of travel.

3a. Random nights like Saturday are rare and fantastic and I love that we always manage to get into such trouble. Perhaps we are a bit too old to accidentally stay out all night, but it was a blast.

10a. Just another reason I heart New York. For the record, Rufus' man bangs were fab, Lily rocked 4 inch heels even though she's clearly pregnant, Lil J has legs that don't end and Dan is simply dreamy - even the Extras agreed. xoxo

12a. Our new friends loved us so much that they gave us inside info for the best casting agency in the city. Sign me up!

15a. 27 degrees freezing to be exact. I also wish I would have kept filming when that lady walked in between us - "Hi I'm BAA...ummm, please, go right ahead..."