Like Sands Through The Hourglass, So Are the Days of Our Lives

I believe I inherited from my Dad the ability to blank on what day, month or year it is if asked. I often forget my age – I have told people I’m 28 and 25 in the same day, and I’m neither. Today, while glancing over my planner, I realized that I graduated from college four years ago this month. I was equally as surprised to see that we’re already five months into 2008… wait, 2009!?! It’s been FIVE years since college? Programming note: BAA smacks head on desk.

…I graduated from the University of Florida

…I had a long term boyfriend whom I expected to marry

…I was so blonde

…I had a little red Chevy Cavalier 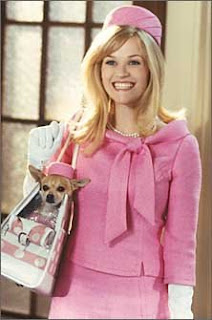 …I smashed up my car and my neck

…I moved to NYC without a job

...I became Big Apple Angie and launched this blog

…I went brunette (and today I’m a redhead!)

…I learned to scuba dive

...My identity theft story was published in Seventeen

…I developed a strange love of sharks and cage diving

…I was photographed for Glamour

…I covered the Heisman Trophy announcement for a Jacksonville news station, which was really just an excuse to meet Tim Tebow

...Hmmm, am I missing anything?

The Next Five Years

I'd be crazy to try to predict!

i love reading your blogs :) this is by far my most favorite. it TOTALLY hit a note with me.

Great to read about your graduation and journey into the working world but it leaves off.... do tell about the decision to move to NYC! I'm still in that in-between phase.

I had no idea you were in the top 50 of the Apprentice, too! Your hair right now looks FABULOUS--keep it this way! I wish I could pull off dark like you do!

I also forget my age quite frequently...and I always thought my dad was lying when he told me that...