Last night in bed, I rolled onto my back and the sudden pain jarred me out of deep sleep. Owwwwwww! I winced. RaeRae rustled next to me but didn't wake up.

Trapeze class really did a number on my torso, I thought. I haven't been in this much pain since my car accident.

Once I remembered the accident, I realized the date. June 28, exactly three years to the day since two cars destroyed my sweet lil Chevy Cavalier. Three years since I told my old boss that I was leaving Atlanta and moving to the Big Apple. Three years since my life changed direction.

The plan was simple:
CAR - I'd sell my car to my brother who'd just totaled his in an accident.
JOB - I'd transfer to our New York office and work in the consumer practice, "my dream job."
APARTMENT - I'd move in with my best friend in Hell's Kitchen.

Two days after I announced my intentions and put all the wheels in motion to move to NYC, I had an email exchange with Jamie, who at the time was little more than a peripheral friend Buckhead Church small group. That was June 28, 2006. 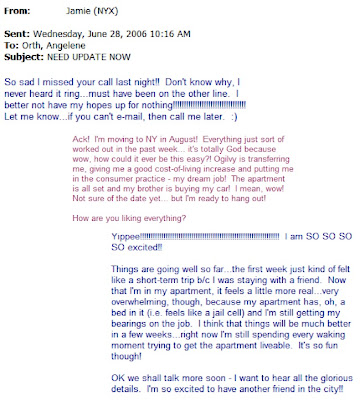 Well we all know what happened to the car - it met an untimely demise about 8 hours after the email convo with Jamie. 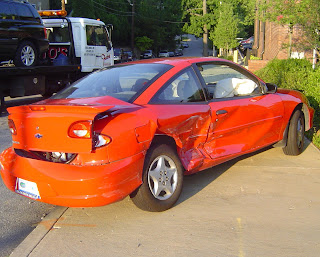 And the transfer didn't work out, so I ended up moving without a job. The only thing that did go according to plan was moving to Hell's Kitchen.

Here I am three years later, with my real dream job in travel public relations and no car. Jamie's still here of course, and we made it past the peripheral friend phase pretty much immediately after I moved. The only similarity between the June 28 of three years ago and the June 28 of today is the fact that I still feel like I got pummeled by two cars...

Love this. So fun/weird to think back to that time and read what we said! I'm so glad you still have our email exchange! :)