Dear Flirtexting,
I'm just not that into you.
xoxo,
Big Apple Angie
The inimitable La La Lauren recently blogged about the flirtexting phenomenon, which as you can tell from the passive aggressive note above, I'm fed up with. In general I'm a big fan of guidelines and parameters, so I've played by the digital communications rules these past few years as crushes have ebbed and flowed. But here's the sitch. R.I.P. flirtexting, you're dead to me. As God is my witness, I'm quitting this game and playing by my own rules. (Rules yet to be determined, subject to availability and liable to change at any time. BAA is not responsible for any loss of relationship resulting in adoption of new rules.)

Faithful readers will testify that I'm a black-and-white, bottom line kinda gal, absolutely direct to a fault. I always just want everyone to get to the point, and I doubly mean that for the fellas. It shouldn't take 20 days, 12 Facebook encounters, 18 texts, 4 emails and a phone call to meet for a drink. It's a beverage ... not the Treaty of Versailles. We're not negotiating peace in the Middle East. I could plan our bloody wedding with that amount of communication.

Digress with me, readers, for one quick paragraph. Can we talk about how this flirtexting business is even worse for poor 'lil me because I care so much about WORDS? As with all writers, I'm sure, every word is painstakingly chosen because I want it to convey my thoughts precisely. Logically I understand everyone’s brain doesn't function in that way, and some folks just throw words away without a thought to their significance... but that leaves me in quite the predicament when interpreting texts. WHAT DOES HE MEAN BY THIS WINKING EMOTICON?! IS HE JOKING? IS HE FLIRTING? DOES HE LIKE ME? IS HE LETTING ME DOWN EASY? IS THERE SOMETHING IN HIS VIRTUAL EYEBALL?

No wonder dating has become such a chore that I usually just avoid it. The self-imposed digital communication rules make meeting people harder than it has to be. Friends, New Yorkers, countrymen, lend me your mobiles! We don't have to abide these absurd restrictions. The Digital Flirting Police are not going to fine me because I didn't wait the proposed amount of time to respond to a text or because I said, "No, I don't have plans on Friday. Did you want to hang out?" Is anyone else out there ready to swear off the rules of flirtexting and join me in justsayingwhattheheckitiswewanttosay?! Bueller?

Fine. The Ange stands alone as per usual. Congratulations to everyone who managed to get married prior to the digital age. YOU dodged a major bullet.

Digressing again, this time, it's sort of a Wayne's World-esque flashback. I'm trying to imagine my parents flirtexting. Neither of them are any good at texting, Dad can't spell and Mom uses abbreviations only she understands. If flirtexting were mandated in 1979, I guarantee you my parents wouldn't have made it past the first week of communication. No way, no how.

Readers, I have created a graph to highlight some of the crappyness inherent in the flirtexting phenomenon. I hypothesize that women bear 96% of the stress brought on by digital communications. While my research* is not based on anything concrete like, err, science, it is rooted in real life observation and the movie "He's Just Not That Into You." It doesn't take six guys sitting around a table 45 minutes to create a witty return text message, right? I'm not even going to lie, girls do that all the time. Even smart girls like me. *This graph is obvi not scientific, but I believe the results will resonate with all the single ladies. 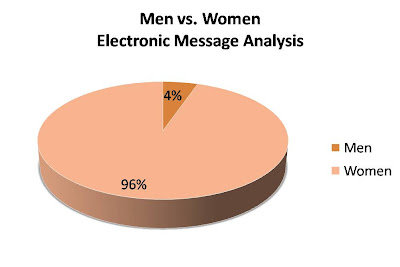 From this moment on, I'm just going to get to the point with these fellas. But BAA, what about the Fail Whale? No biggie! I can't be any less single than I am now, you know?

Thomas Jefferson once said, "Every generation needs a new revolution." Let this be ours. Down with flirtexting. Viva... directness!

Can I get an amen?