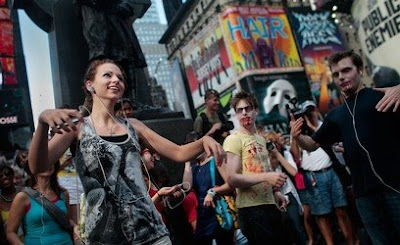 NEW YORK - JUNE 27: Fans of pop star Michael Jackson, Rachel Orth (L), a tourist from Florida, with Alex Demers and Jimmy Maize of New York, make zombie-like dance moves during an online-organized "flash mob" performance of the Jackson song "Thriller" on June 27, 2009 in New York City. The gathering, informally organized on the social networking website Twitter, brought dozens of Michael Jackson fans out, some in the signature make up of the hit song's video, to dance and remember the pop star, who died this week in Los Angeles at 50.

thats me! in yellow. hooray.

If you ever want to come to Lexington, KY for Halloween.....every year on Halloween they close off the streets of downtown Lexington and reinact the Thriller video all the way down the street. It's pretty awesome. I went last year for the first time and this year (if I have time) I want to audition to be one of the zombie's. LOL. Just thought I'd let you know. If you ever come to Lexington on Halloween make sure you check it out. You have a place to stay too. :) (you should be able to read about the Thriller reinactment if you google Thriller+Halloween+Lexington, KY)
~Brittany B