Winter somehow managed to elbow autumn out of the way this year, bringing butt cold temperatures and the early debut of my puffy coat. You all know how much I loathe the cold, but you know what makes it even more unlovable? The psycho-killer radiator in my bedroom. With all the subtlety of, I dunno, my Mom on Facebook, it roars to life once temps dip below about 50 - and I don't sleep until April.

The radiator in my room emits the kind of commotion that not only jars me awake at night, but also makes me hallucinate kinder, gentler ways to go insane. If Nancy Grace filmed her show from my bedside every night, I'd still get more rest than I do with this radiator racket. The noise is hard to describe in words, generally because when I hear it, I’m willing to forcibly make myself deaf with a sharp object -- but if I had to say, it's either like a dryer with steel-toed sneakers banging around or Fraggles using jackhammers to excavate within the walls. That jacked up radiator makes winter worse than it has to be. 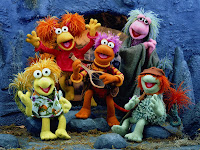 To try and block out some of the ruckus, I had to start wearing earplugs. Unfortunately, I have freakishly teeny ear holes, so even kid-sized foam earplugs are too big and uncomfortable. Due to the discomfort, most nights I’ll wake up around 2 a.m. with both earplugs cupped in a fist over my heart – apparently from unconsciously pulling them out while sleeping. (No idea why I cup them over my heart – that’s a mystery.) I always realize what I’ve done with the earplugs when I wake up to the Fraggles going berserk in the walls. I replace them and start the cycle over.

The other night was different though. I’d gone to bed without supper because I’d had a big lunch and was also about three days from wearing a swimsuit in public – good reasons to skip a meal, if you ask me. I woke up on schedule around 2 a.m. and found my earplugs clutched in over my heart – the usual. I stuck them back in and feel asleep again. Though I was noticeably hungry, I wasn’t famished enough to get up and steal Jorel's Oreos out of the cabinet. I drifted back to sleep and began to dream… mostly about frosting and other tasty snacks. Can you see where this is going?

The next time I woke up, I noticed my earplugs weren’t in my ears or clutched in my fist. So where were they? And what was I chewing on? At some point during my snack dream, I had popped the earplugs in my mouth! Seriously, who does that?! Can you imagine what would have happened if I’d choked on them in the middle of the night? *If I end up departing this world as a result of something embarrassingly stupid like that, I have instructed my little sis to make up a better, more inspirational story to tell at my memorial service. No one can know I kicked the bucket because of bizarre unconscious snack choices.


I spit the earplugs out and laughed at myself for a good five minutes before curling up and going back to sleep. The next day, I grabbed a special wrench (provided by Jorel) and shut the radiator off for the season. I’d rather be cold than choke to death on child-sized foam earplugs. Wouldn't you?

Too funny! Nice reference to me by the way.
Mom