As I sit here in seat 24E on JetBlue flight 187 from JFK to Las Vegas, it occurs to me that I probably should catch you up on the adventures of the past few weeks before I get all wrapped up in whatever’s next. Everything since Christmas is a bit of a blur, and I haven’t even had time yet to do my annual year in review in my journal. So here goes...

After having a sore throat for 2 full weeks, I flew back to NYC on the early flight from Jacksonville and grew progressively sicker as the morning wore on. It took me nine long hours to travel from Middleburg to my office, and after an unsettling and bumpy flight in which my seatmate threw up as we were landing, I wasn’t feeling so hot myself.

I only made it a few hours in the office before my boss commanded I go to the doctor. After hanging out with every sick tourist in NYC at the Duane Reade walk in clinic, I was diagnosed with an “angry” sinus infection and “maybe the flu, maybe walking pneumonia.” All that nastiness with guests on the way - what would Martha Stewart do?

I woke up feeling like death, but forced myself out of bed long enough to finish unpacking and light a few candles to make the apartment presentable for when Hodgie & Nathan arrived. I thought surely the boys would be sympathetic to my ailments and cut me some slack on the inevitable revelry… however, they arrived raring to go with 40 oz. beers in hand and absolutely no concern for my health. To be fair, they had even less concern for their health because, despite my explicit warnings about the frigid temperatures, they arrived wearing hoodies. No gloves, no coats, no hats – just T-shirts and sweatshirts. Rookies.

After medicating all day, I felt well enough to take them to a little establishment in Hell’s Kitchen with yummy sliders and cheap drinks. After dinner, we walked to Rockefeller Center to see the Christmas tree and we showed Nathan Times Square in all its pre-NYE glory. 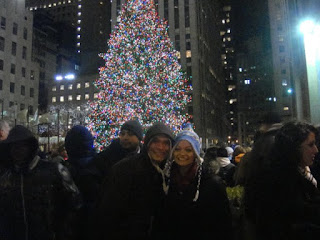 Nathan bought us matching hats on the street and Hodgie ended up waiting in line for the Burger King bathroom with Dora the Explorer. On the way home we swung by Dave & Buster’s to play a few games, particularly the electronic jump rope that both guys sucked at. Even though I wanted to whoop them both, at that point I was so sick I thought I might faint before I made it home… so jumping up and down rapidly in pursuit of tickets was not in the cards for me. 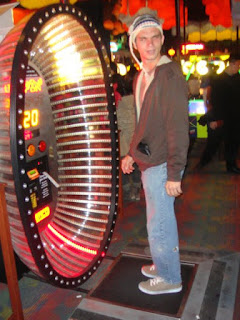 I think we went to Pinkberry on the way home, but I can’t remember. I do remember that Hodgie saw a pile of “snow” in the back of a parking lot in Times Square and just had to make a snow angel in it. The problem, of course, is that it was the snow left over from two weeks ago, so really it was just an ice boulder. He flailed around on it but ultimately was unsuccessful. He also picked up a “snowball” that, unbeknownst to him had frozen into a rock hard ice ball, and he threw it at me. Yowch. 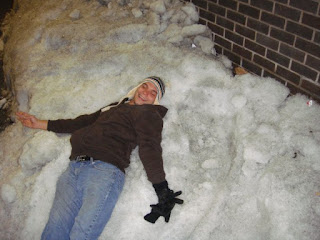 From the time we got home in the wee hours of the morning, I was feverish and had chills. I was shaking so bad at one point I couldn’t twist the cap on my contact case. It’s been a long time since I’d been so sick, so I was quite convinced I was dying. I asked Hodgie to keep an eye on me and he promptly passed out, as did Nathan. I offered to pull the bed out for Nathan, but he preferred sleeping on the rug. Yes, the living room rug.

After a boiling hot, restless night, my fever wouldn’t break. I opened my eyes and saw that it was snowing heavily, so even though I was walking dead at that point, I dragged my bones up the stairs to wake Hodgie. I pulled the blinds up and eeked out, “Hodgie, snow!” Then I laid on the cool floor for a while with a wet washcloth on my head. 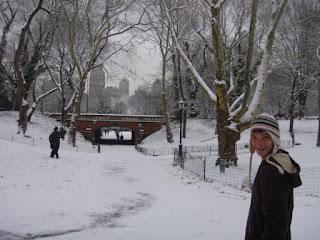 Hodgie has never seen snow, so it was fully worth getting out of bed just to see his face full of childlike wonder. If you thought I was excited about the snowstorm from two weeks ago, you should have seen Hodgie’s face when he first registered what he was seeing out the window. The boys went to Central Park, where Hodgie made his first snowman, snow angel and snowballs. They were very proud of themselves for “schooling” some 8-year-olds in a snowball flight. I stayed in bed, fitfully fighting the fever that made me think I was succumbing to whatever it was Nicole Kidman had in Moulin Rouge. “I am sold on snow,” he said after wallowing in it all morning. 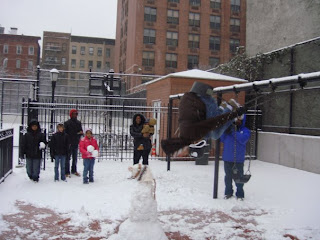 Around noon my fever finally broke, and I was able to hang out with the guys once they got back. We went to the grocery store to buy supplies for our New Year’s fete later that night and on the way home, ran into Kristen Schaal (Mel, from our favorite show Flight of the Conchords) and she was so gracious to take a picture with the guys. Since I looked like death, I declined to be photographed. After that, Hodgie declared it was the best day of his life. 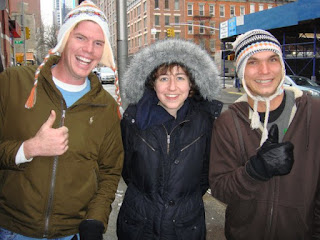