Medal Count
Wii Ski Jump
Ok, obviously this is not a real snow event, but it did help us to mentally prepare for our first downhill experiences on a real ski hill. I took an early lead on Wii Ski Jump (let’s be honest, I practice at home!) and I was thoroughly looking forward to beating Hodgie. However, after taking note of my technique, he managed to update his jumping style, ultimately wiping the floor with my high score. Gold - Hodgie. Sad, sad silver - Angie. 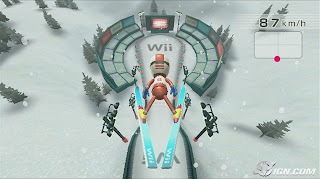 Hodgie... FTW.
Bowling
I absolutely cannot stand bowling, so both times we went to Castle Lanes (the 11th best bowling alley in the country, says Wisconsonite Erricka) I sat on the bench. I believe Alyx, Aunt Peggy and Mom rocked it, which comes as no surprise considering bowling is like, the state sport of Wisconsin. 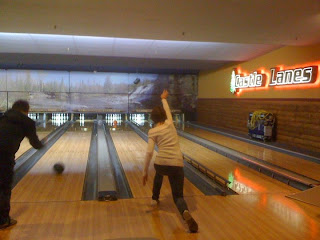 RaeRae and her long lanky limbs.
Karaoke
You can probably guess who won this. Props to Castle Lanes for having a hunting lodge-themed bowling alley AND karaoke in the same place. Team gold medals go to Sammy for bravely singing every song with me, and to Hodgie for bringing his special falsetto talents to Bohemian Rhapsody. 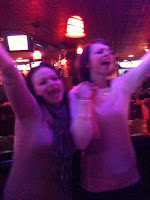 Singing 'Sweet Caroline' with RaeRae
Driveway Shoveling
Wisconsonite Auntie Sis, to no one in particular – “We’re going to get a lot of snow tonight.”
Hodgie and Daniel – “Can we shovel the driveway?! Please!!”
Auntie Sis – “No one has ever asked to do that before! Of course you can!”
Hodgie and Daniel - "AWESOME!"
Auntie Sis… FTW. 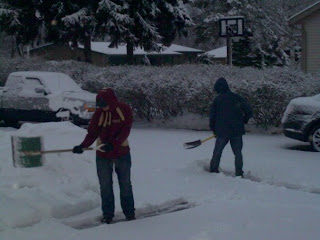 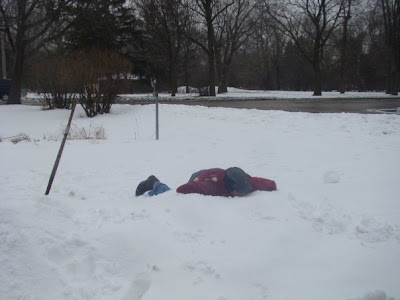 I’ve never seen anyone try it face down before.

Snowball Fighting
I can’t count how many times snowball fights broke out, but my favorite one was probably after bowling/karaoke. We got home around 2 a.m. and should have been quiet and considerate of dear Auntie Sis and her neighbors. Instead, before I was even out of the car, Hodgie was on the roof of the garage and a brigade of snowball-armed relatives was posted strategically around the yard, ready to attack the last car of family members to arrive home. 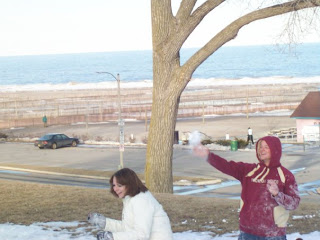 A precursor to the epic middle-of-the-night fight
RaeRae and I quietly backed into a nook in the bushes to hide, and we were stealthily stockpiling weapons until Aunt Peggy decided to come join us. In her exuberance, we all ended up on our backs like turtles when the next car arrived and mayhem broke out all over the neighborhood. Topher would up shirtless and running down the street, Aunt Peggy continued flopping around in the snow and Hodgie pelted everyone without discrimination from above. 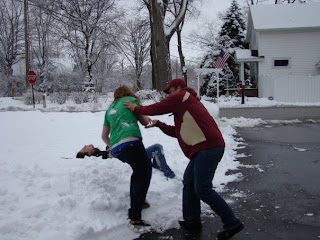 The girls really had no chance against Daniel.
The next morning, Auntie Sis of course noticed that her formerly pristine, snow-blanketed front yard had been the site of an epic battle... and she just shook her head. "Floridians," she said.

The best events are yet to come... stay tuned!