Sledding
I would like to award three medals for sledding… one Evel Knievel Award for Sledding Awesomeness goes to Hodgie. I was first impressed by his ability to ride down an entire hill standing on a toboggan, however that feat was eclipsed by some mad-crazy face-first half-pipe tree-avoiding tricks. 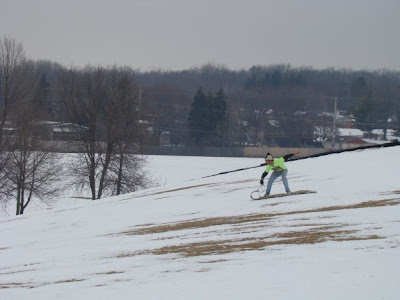 One Narrowly Avoided a Hospital Visit Award goes to Mom, Aunt Peggy and Christopher for their epic wipeout while we were night-sledding. I breathlessly ran down the huge hill to see if they needed an ambulance - turns out they were laughing so hard and were so entwined that they could not move.
Aunt Peggy – “Am I bleeding? Oh no, is my face bleeding?!” 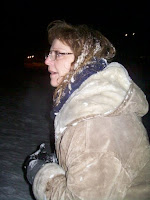 Mom covered in snow post-wipeout
Finally, the Most Cousins on a Toboggan Award goes to RaeRae, Topher, Hodgie, Danielson, Nubz, Kly, Jesser and me. That was an epic wipeout, too, but less dire than Mom's/Aunt Peggy's. 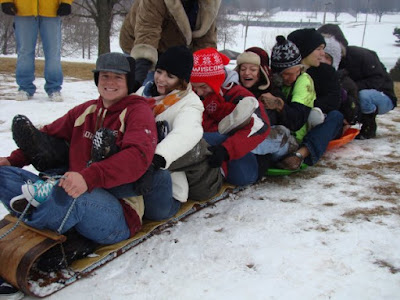 Look at my face. I'm the only one on this
ill-fated contraption who fears imminent injury. 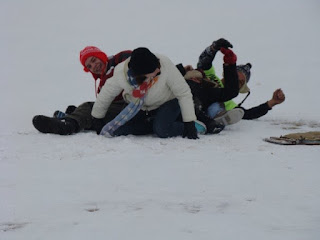 And rightly so. Look at this pileup!
Snowman Wrestling
What happens when you see a 6-foot tall snowman minding his own business at the bottom of a huge snow covered hill? If you're from Wisconsin, nothing happens. You leave it alone and go about your life, uninjured. If you're from Florida, you decide to attack it at full tilt and take that sucker down to the ground...

...until it takes you down to the ground, you big doof, because it's frozen solid as a brick wall. The medal goes to Daniel for getting worked by sculpted precipitation. Or maybe it should go to the snowman.

Ice Fishing/Snowmobiling
Hodgie and Daniel are the only ones who can win this, because they are the only Floridians dumb enough to go ice fishing. 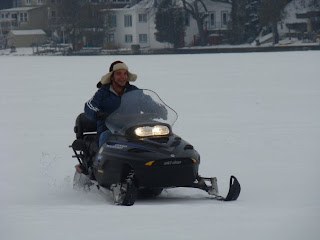 Hodgie said, “I didn’t see one fish all day, but it was still awesome.”
Snowboarding/Skiing
Though the Floridians naturally had never been skiing or snowboarding, we were lucky that the Wisconsinites (namely my Type A counterpart Erricka) were fully prepared with cool gear. When we arrived at Wilmot, we looked like pros. 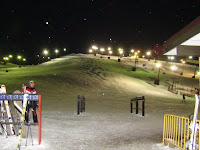 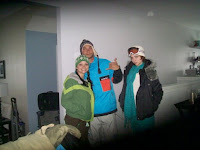 Wilmot, a ski area southwest of Racine.
Then we saw the chairlift. RaeRae and I took one look, said a collective, "Yeah right," and decided to stick with the bunny hills and flat surfaces. The Wisconsonites had other ideas, promising, "It's the only way to learn. You just go to the top and everything will be fine." After hemming and hawing more than anyone has ever hemmed and hawed, I hopped on the lift with my cousin's fiance who was so patient with my apparent lack of snow skills. Halfway up the lift, not only was I terrified, I was trapped. I mean, where do you go from there?
My dismount at the top was anything but graceful. I clumsily hurled my body and its attached snowboard forward, face-planting into the snow. It was all very dramatic and properly humiliating. While feebly trying to drag myself away from the oncoming chairliftees in front of a dozen people (cousins, my brother and staff members) who were snickering at me, I wrenched my knee and was still lying battered in the snow when we saw RaeRae and cousin Andrew preparing to dismount. I recognized that panicked look on her face... it was the same face from trapeze class when she said, "I am NOT doing this."
Fortunately for me, my chairlift embarrassment was brief, because nothing could ever surpass RaeRae's dismount. Andrew boarded off gracefully, but RaeRae, well, she just never let go. Andrew turned around and tried to pull her down, but she was holding on as though her life depended on it, and he couldn't wrestle her free. As the chair began to ascend for its loop back down the hill, everyone at the top was shouting "Let go!" and RaeRae was responding, "I am!" But she was stuck to the chair like a tongue on an icy flagpole.
Finally once she was several extra feet up in the air, some bewildered Wilmot worker pushed the emergency stop button and Andrew was able to coax her to jump down... right on top of him. Poor guy! Wisconsonites all around the hill gaped in disbelief at the spectacle. "I'm so sorry," I shouted to no one in particular, still lying prostrate in the snow. "We're from Florida!"
It was a lot like this video.
Once I finally stood up on my snowboard, I realized I had to somehow surf all the way down the stupid hill. It didn't go so well. 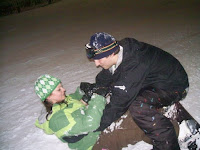 Dear patient cousin Andrew, helping me up for the 100th time
I wasn't the only one spending more time on my backside than on my feet. Mom spent 30 minutes on her back on the ski hill because she just couldn't get up. During my snowboard lesson (prob should have taken that before going up the hill?) I nearly amputated my thumb with the snowboard while trying to scoot my foot into my boot. I ended up attempting an even bigger hill three more times, but I never quite got the hang of standing up for longer than five seconds. I face-planted, butt-planted and most painfully, chest-planted. The next four days I was in agonizing pain in every imaginable spot on my body, and there is a big chunk of my thumbnail missing from the near amputation. But I wouldn't trade that night with my family for anything. 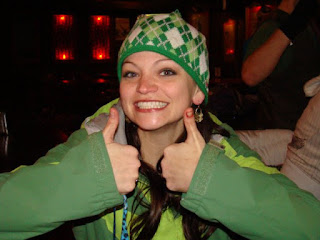 My thumb covered in blood. Looks very dramatic in snow. 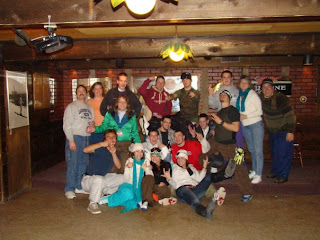 I think we all get medals for trying... but the Wisconsonites are the only ones with any skill.
Some honorable mentions: 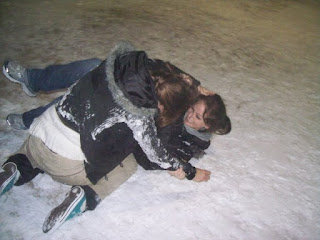 Snow Wrestling: I guess we both win because we hugged afterward. 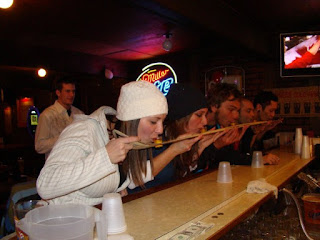 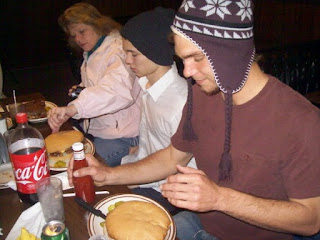 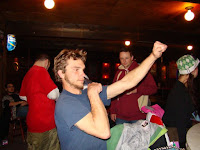 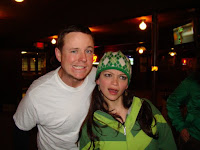 Goofiest looking Olympian: It's a draw.
Hodgie put it best on his Facebook status the next day: Thanks to the Wisconsinites for making a sad trip one we won't forget... dangole.