I'm smiling bigtime right now. Know why? After last weekend's monsoon (which incidentally caused a massive leak in my bedroom ceiling) joined with this year's snowicane, snowmageddon and snowpocalypse, it's finally the tiniest bit warm here today! No matter how much I desire it to be so, it's not yet flip-flop or tank-top weather, but it fills me with joy to know we're moving in the right direction. Before I know it, I'll be sweating my face off in Central Park, trying to get a tan in the middle of a grassy field with 3,954 other people. After the winter we've had, that sounds like heaven.

Normally around this time of year I'd be jonesing for a Mister Softee fix, however I confess I have been cheating on him for a while. What? He just leaves for six months at a time and I'm supposed to wait around?
Well, I have a new warm-weather treat obsession. Truthfully we've been seeing each other for a while now. Ladies and gentlemen, have you met Pinkberry?* It's 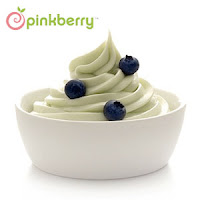 Perfection in a cup. It's

Incredibly delightful and
Not-to-be-missed with
Killer toppings, like
Berries! It
Entices you to return day after day - but don't feel guilty! It has
Reduced calories and
Really
Yummy flavors.
So, I'm a bit of a fan.. in real life, on Twitter and Facebook. It's not weird at all to love a mysterious frozen yogurt-like substance this much. Or is it? A while back, I found myself freaking out a little too much when I thought about what would happen if I were to ever leave NYC for good, since Pinkberry hadn't franchised past NY and CA at that point. Lucky for me, they're growing so if I ever want to live somewhere like Kuwait (what could be better in the desert than Pinkberry?! Genius!), I'll be set.
*FAIR WARNING: You might get addicted if you try it. Also, if you visit the Web site... turn the sound off.