Wisconsin, So Much More Than Cheese

Thanks to relatives who really take the command to “be fruitful” seriously, I have a jumbo-sized extended family that includes cousin-designations I’m not even familiar with. After a hectic rush to get the Florida contingent to Wisconsin in time to say goodbye to Gram, it was comforting to be surrounded by the all those second cousins and once-removed Wisconsonites in the ICU. Following her passing, we agreed to meet the next day at the church where Gram served the hungry and homeless every Thursday. We heard from many of the people she served each week about what a great lady she was, and several people intimated how proud she would have been to see us all dishing up supper with a side of sass just like she did. 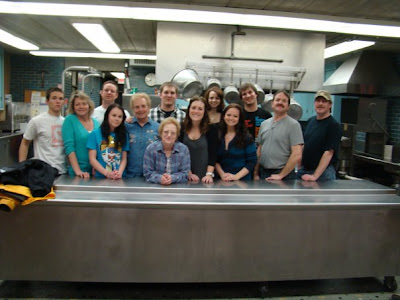 Just a few of the gang
When we weren’t volunteering at the church, coordinating funeral arrangements or eating copious amounts of pizza, the dozens of descendants who descended on Racine, Wi., managed to have our own little version of the Winter Olympics. I’m sure the simultaneous, legit Olympics were awesome, but as someone who still guffaws at clips from America’s Funniest Home Videos, I have to admit that I couldn’t get enough of my fellow Floridians attempting winter sports for the first time. It was noticeably more entertaining than the hours upon hours upon hours of curling we saw every time we had a moment to flip on the TV. I actually thought about calling NBC… Hodgie on a sled is ratings gold, as you’ll soon see. 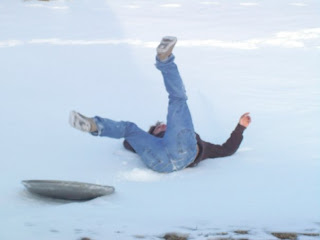 Just a preview to get you ready for the next post
As native Floridians, siblings Hodgie and RaeRae and cousins Daniel and Topher have never participated in real snow sports. You may recall Hodgie’s first snow experience just happened in NYC, but as he and Nathan were unable to locate a sled, they just rolled around in the powder and called it a day. Similarly, I’ve never seen real snow other than in NYC, where it’s beautiful for about an hour and then it turns into sludge. Wisconsin was like… Narnia, positively coated in fluffy, clean, white snow. And we could not wait to play in it.