I went to sleep at 11 p.m. and woke up this morning at 4 a.m., without an alarm. Stressful trips will do that to you, and even on a fun trip I have trouble sleeping the night before an early flight. After quickly throwing my toothbrush into my suitcase, I fought my way to JFK via my favorite bargain route - walk to the E train, take it to Jamaica Station, transfer to the AirTrain and stroll leisurely into the gleaming white halls of JetBlue's Terminal 5. 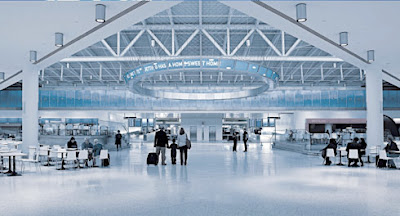 This morning was not so routine. Despite my best efforts, I hit multiple snags on the way that I really should have taken as a hint to get back in bed and start over. First, my neck is on the verge of locking up again so carrying my laptop, a dozen mini cupcakes and my suitcase behind me for two avenues at 5 a.m. wasn't ideal for my physical health. My mental health was tested when I arrived at the E train station on 50th & 8th to find it locked up. I reacted as you would expect any 3-year-old to do - I kicked the ground and said WHAT THE CUSS. About 90 seconds into my tantrum, the station agent came and unlocked the gate with a kind smile. Don't know why he didn't think to tell me BEFORE I hefted my suitcase down the stairs that the E train wasn't actually running... where did he think I was going with my luggage at 5 a.m., Harlem?!
I quickly dialed up an alternate route on my iPhone, trying desperately to avoid taking an expensive taxi. I found out that the E was running on the F line, or something to that effect, so I hopped a taxi to 6th & 50th. (Aside: I've been in the cab with some crazy drivers, but this guy was really hopped up on something AND he was using his hands-free headset and yelling in some unrecognizable tongue. Rude.) Long story short, every single thing I attempted this morning was another speed bump, and I barely made it in time to check in. Security was moving great until it was my turn, and then all the old ladies in the airport decided to wheel on through the metal detectors at the same time, elbowing me out of the way as they went through at a snail's pace.
All the rushing around and early rising was for nought however, because I'm flying standby and there was no room on the plane for little old me. I was hopeful about my 2nd option routing through Orlando, however I got bypassed by 26 other people for that flight, too. I had a little temper tantrum, thought about kicking one of the joyful youngsters en route to Disney World, but then got over it and started making a list. I immediately felt better.
7:55 a.m.     Rejected from first flight
10:40 a.m.   Rejected from second flight
10:41 a.m.   Pouted
11 a.m.        Finalized T5 to-do list and set out to explore
Located T5 spa - concluded I could rub my own arm for 10 minutes and save $65.
Tried on hot pink dress at the surf shop, but it had one too many ruffles for my taste.
Attempted to order lunch from the gate-side touch screens. I've always admired the idea and never have the time to use it. Unfortunately, the touch screens didn't work, so I actually had to stand in line and get my own food.
Poked around at the Sephora vending machine. Who needs a four pack of glitter nail polish RIGHT NOW?
Made friends with the saleslady at ExOfficio. Love their super portable hammocks and fancy travel underpants. She offered to escort me past security if I ever want to come shop sometime when I'm not traveling. How great is that?
Browsed a store that sells pens you put together yourself. Why?
Got a drink at the bar and watched NFL Draft coverage. When the bartender said something snarky about Tebow's NFL prospects, I put on my Florida baseball hat that I keep in my carry-on, just in case I have to represent. Randomly, I pulled out this week's Sports Illustrated from my bag which happened to have a great article on how Tebow's stock has gone sky high in past weeks, and how pundits are predicting that he might even go to a team late in the first round. I tore it out and left it on the bar with the bill.
Texted Lauren, Jarvis & Kelly some random silliness.
Checked out the travel section at borders. Made notes for a few titles that I need to add when I don't have to lug them around an airport all day.
Freshened up my makeup. Apparently, JFK is one of the top airports to meet someone... though I am here several times a month and I can't say I've met anyone, ever, aside from TSA personnel.
Ate Swedish Fish and tried to pronounce Eyjafjallajokull.
Blogged. Tweeted. Played Words with Friends.
It's now 3 p.m. and I'm sitting in a corner listening to the Glee soundtrack. "Don't tell me not to fly, I've simply got to," really means something to me today. 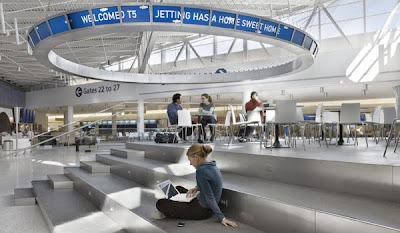 4 p.m. Update
Booked trip to Hawaii.
Checked in for 8 p.m. flight. Cross every extremity that I make it this time, so I haven't waited here all day for nothing...
5 p.m. Update
Watching Justin Bieber & Tina Fey on Hulu. "I'll buy you a Panini, and some Spanx to make you teeny." I really don't want to like this Bieber fellow, but he's such a little charmer. (And his hair knows where it wants to go.)

I know it's really not funny that you're stuck at JFK. But actually, all of this is really funny. I'm sorry and thanks for the giggles at the same time. Bahahaha