The first few days of my European vacation are a blur of time-zone changes and foreign languages in my memory. I do vaguely recall that business class was the jam – how can I ever go back to coach? I had Champagne and a hot fudge sundae in my adjustable bed-chair, and my seatmate was, for once, not an obnoxious, chatty, coughing, smelly weirdo.

As we were settling in for the flight and getting acquainted with one another, Lady Gaga, in all her pouty, platinum-haired glory, walked down the aisle and sat two rows behind us. 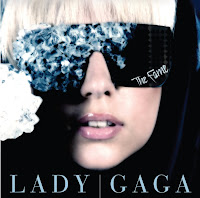 “Dude, O.M.G!” I said to my new friend of 5 whole minutes, grabbing his arm and probably scaring the daylights out of him. “That’s totally Lady Gaga!”

“DUDE! I have a radar for celebrities! And who else dresses like that for an overnight flight?”

After some surreptitious over-the-shoulder staring, it was confirmed that Lady Gaga herself was in fact on our flight to Amsterdam. Knowing I was about to be disconnected from the world for eight hours, I did what any social media-obsessed gal would do – I rushed to Tweet the news before the “please turn off your cell phones” announcement.

I don’t know if this is how it works for everyone, but my experience is that just being in close proximity to Lady Gaga for eight hours will make her songs stick in your head. I tossed and turned all night (well, as much as one can in a glorified recliner) as Paparazzi and Just Dance looped in my brain. I half-entertained the idea of tapping her on the shoulder and showing her the moves from the Bad Romance video that RaeRae and I perfected during Christmas vacation. Luckily sanity prevailed and an international air incident was avoided, but only because she was sleeping and I hear she’s been really exhausted lately. Poor Gaga. 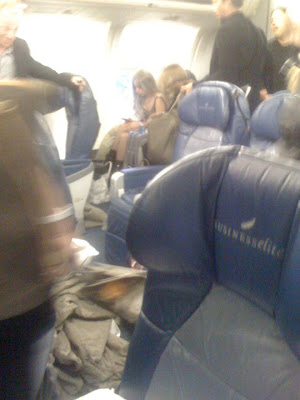 Once we landed, of course I had to snap a few sneaky pa-pa-paparazzi shots (ew, I feel a little creepy - like Perez!) to prove it was really her. When I was safely in the comfort of the business class lounge, I tapped into the free WiFi and saw that my Twitter announcement had received quite a bit of attention. One kid in Amsterdam thanked me for helping him to meet Gaga – apparently he’d seen my Tweet and rushed to the airport to meet her. 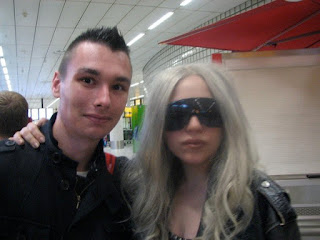 I felt a little underdressed in my black romper once I saw Gaga's metal-studded leotard, fishnets, sky-high black heels and crazy hair, but honestly how do you get through security in a getup like that?!
More Europe details to come…