No Amore in Roma

London. Paris. Rome.
As of a few weeks ago, I’d only experienced two of the metropolitan city trifecta presumed to embody the European experience. With glorified reputation comes big expectations from visitors, and my ideas about Rome were no exception as the Voyager of the Seas docked at the port of Livorno. I wondered if Rome could be as distinctly charming as London or as much like an impressionist painting as Paris – especially in light of the fact that I had only about 10.5 hours on a private cruise tour to explore. I wanted romance, mystery, intrigue and a handsome stranger on a Vespa from my day in Roma… the result of too many viewings of Roman Holiday on TCM? 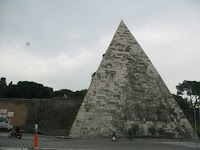 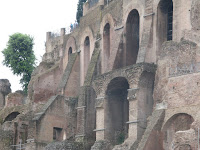 In short, Rome was nothing like the others, and while there was no mystery man on a Vespa, I wasn’t disappointed in the least. Coupled with a particularly overcast, hazy day, Rome exuded mystery everywhere I looked. Layers upon layers of history dominated every vista. In Rome, it’s not unusual to see in one 360 degree turn, Roman ruins, crumbling temples, arches, columns, theaters, baths and basilicas from thousands of years ago to modern day. 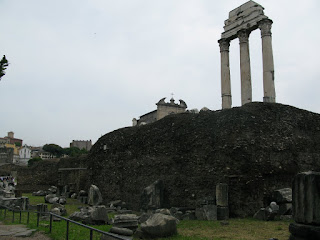 I had a checklist of Monga-mandated stops to visit, and fortunately they were almost all included in our cruise tour. Our handsome Italian guide trekked us around the ruins of the Forum, the Pantheon and to the Trevi Fountain. If the legend is true, Monga will be returning soon… and I’ll be married in a year. I double dare you to be right, Trevi. 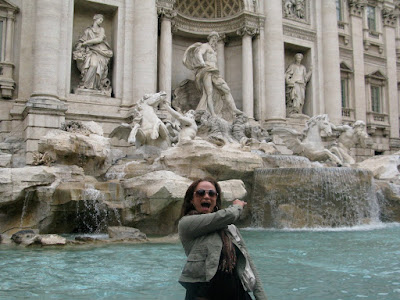 I will sheepishly admit that when I saw Caesar’s Palace, I leaned over to my neighbor on the bus and said, “Is this the real Caesar’s Palace? Like, did he ever live here?” I had multiple “ah-ha” moments brought on by comparing Caesar’s Palace in Las Vegas and the real deal– those Vegas architects sure did a bang up job. I felt like I’d already been there! 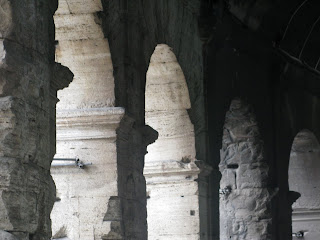 I’d been told the Coliseum was a tourist trap, what with its dozens of cheesy costumed Roman soldiers outside, but I found it mesmerizing! It’s absolutely colossal… oh, I guess that’s where the name comes from… and, aided by recollection of the movie Gladiator, I could almost hear the swords clanging against shields, the lions growling and the ruthless Roman fans jeering in the stands. I felt so conflicted – while the structure itself was legitimately awe-inspiring, I couldn’t help but imagine the martyrs who were murdered on a whim of the emperor or the slaves who fought huge animals for the entertainment of the upper crust. My imagination ran away with me and what I came up with was chilling. 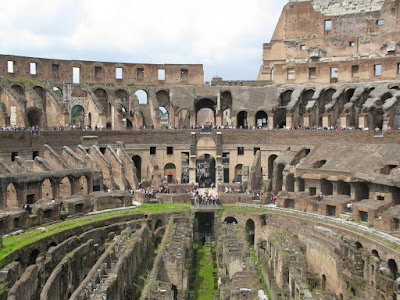 After a hearty Italian lunch of, what else?!, pasta, bread, vino and gelato, our group proceeded to Vatican City to take in St. Peter’s Basilica and its imposing facade. The basilica was cavernous on the inside, lined with massive stone and bronze sculptures of past popes and saints. Visions of Dan Brown novels danced in my head, and I had the feeling some shady clergymen were up to shenanigans in an ancient catacomb nearby. 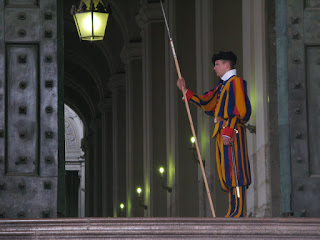 For luck, I rubbed St. Peter’s worn-down bronze toe as millions have done before me (I thanked God for Purell immediately after having that thought.) Though we had little time inside, our tour guide gave us a fantastic overview of the highlights, including markings in the center of the basilica indicating how other large churches measure up… FYI, St. Paul’s in NYC is about half the size of St. Peter’s. 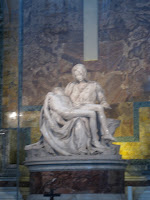 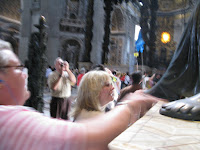 While 10.5 hours in Rome isn't quite enough to fully grasp the vibe of the city, it was a fantastic way to sample the highlights so I know what to spend more time on when I come back. Please, Trevi, bring me back soon!