Sebastien - Do you like hip-hop?
BAA - Yes, I’m a big Jay-Z fan.
Sebastien - Oh, he said somewhat disapprovingly. I prefer West Coast rap.
BAA - Ah, of course. Have you ever been to the US?
Sebastien - Oui, I went to Compton!
BAA - I’ve been to Compton, too! I didn’t see any rappers though.

You may be wondering who in the world Sebastien is and how I ended up in his car. As I wandered around the outside of the terminal trying to find a safe place to sleep, a soon-to-be off duty Air France employee approached me.

“Excusez-moi, mademoiselle? Are you lost?” Sebastien asked. I explained how I’d somehow exited the terminal and couldn’t get back in.

“Oh, you went the wrong way,” he said in French.

“De toute évidence, si.” Merci for stating the obvious, dude. At first I was curt, partially because as a gal traveling alone, you have to be skeptical of all strangers, even dapper airline employees, but also because I wasn’t feeling well at all and I just wanted to rest and not be bothered.

“Mademoiselle, qu’est-ce que vous allez faire?” I explained (in English – I was too tired to parler en francais) that I was just looking for a cozy nook to sleep in out in the public space, when horror clouded his face.

“You can’t SLEEP out here! This is where all the, how do you say, homeless men come to make danger in the night!” I wasn’t quite sure what to think about his adamant declaration of danger-making in the night, but he seemed sincere enough and truly frightened for my safety. I looked around and he was right - some danger-making riffraff types were already converging. According to Sebastien, the riffraff are so active that CDG shuts down the public restrooms and removes the benches to discourage gathering. So, sleeping in the airport was completely out of the question if I wanted to be safe and/or comfortable.

Helpful Sebastien offered up a few options, the first logically being his spare bedroom.

“I’m sure you’re a very nice guy, but my mother would kill me if I went home with a stranger I met at the airport,” I said apologetically. Sometimes it’s nice to blame mom. He nodded sympathetically, and offered to let me sleep in the employee lounge downstairs. It wasn’t a bad idea. I’d be alone all night safely hidden in the office, but I couldn’t go out for any reason if I wanted to come back, because the door would lock behind me, and there was no bathroom. I checked out the office and agreed for a moment, but then abruptly changed my mind. I was really feeling ill so I didn’t want to be trapped in an airport office all night with scary vagrants wreaking havoc just outside in case I had some sort of real medical emergency*.

Finally, Sebastien offered to call some airport hotels to see if there was availability. After several attempts, he found a relatively inexpensive one and asked them to reserve the room. I planned to take the hotel’s airport shuttle, but since it was so late it had stopped running. Sebastien offered to drive me of course, and though I know better than to get in the car with a stranger, I was pretty much choosing between sleeping with one eye open on the ground of the airport terminal or snoozing in a clean quiet hotel where I could be ill in peace.

I called RaeRae while Sebastien was getting his car out of the garage and told her if I didn’t call her back from my hotel room in 20 minutes, she should call the police.

“I don’t know the number for the French cops!”

“Nevermind. I WILL call you back. If he tries any funny business, I will go ninja on him,” I said. I can’t imagine that was terribly reassuring to RaeRae, who has seen me attempt to ‘go ninja’ on a man in ninja class. It didn’t work out well for me.

Sebastien and I chatted easily in franglais during the 15-minute ride to the hotel, and as mentioned above, discussed our distinctive rapper preferences. There was no funny business, other than the absurdity of chatting about our respective and highly unorthodox visits to Compton. When we arrived at the hotel, Sebastien was kind enough to carry my bags in and then flash his employee ID to the desk clerk for 20% off. He spent two off-the-clock hours helping me out and expected nothing in return. (I did write a nice letter to Air France!) How often does that happen, in France or anywhere else?

Crisis averted. New friend made. Discount accepted. What more could you ask of one night in Paris?

The next morning, my foolproof plan continued as though I'd never been stranded in a danger-making shenanigan zone. I took the hotel shuttle back to CDG, hopped the RER-B into the city, ate nutella & banana crepes with my cousin and lounged under the Eiffel Tower for an hour before returning to the airport and flying back to NYC. 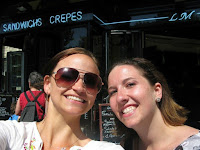 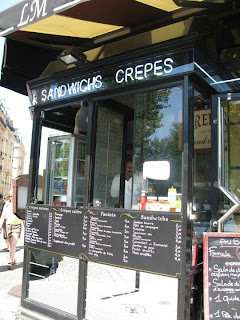 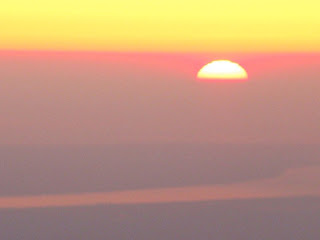 *When I got back to NYC, I went straight to the doctor and had some tests run a few weeks later. Everything is ok!

OMG you got it a car with a stranger!
You are so grounded!OMG Ang. I thought you had more sense than that.
MOM