Thank You for New York

On the corner of West 47th St. and 10th Avenue, you’ll find Five Brothers Gourmet Market. Open 24 hours a day, Five Brothers is part deli and part grocery, with overpriced $7 boxes of cereal and reasonable $3 sandwiches. Somehow the gourmet part eluded me all these years, as I have only patronized the brothers for junk food, diet sodas and tasty grilled cheeses. 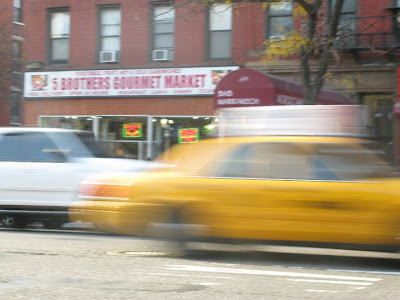 There are plenty of other options for a quick bite or a can of corn in the neighborhood, but early in my NYC life I singled Five Brothers out as my favorite. I can’t tell you how many times I’ve been short on cash (they have a $15 minimum for cards) and they’ve said without hesitation I could just pay them back whenever. That’s never happened in my hometown.
Since a 4 a.m. incident three years ago, my favorite cashier at Five Brothers has called me Twinkie. Having made our way toward home from Friday night karaoke at Mr. Biggs, Erin and I stopped by to stock up on our usual late night snack – chips and dip. I was stricken with a sudden craving that only a baked item with an unbelievably long shelf life would satisfy – a golden Twinkie. There were none to be found next to the Ho-Hos and the Ding-Dongs, but I was ravenous for a Twinkie, so Cousin went to the stock room to find one.
And find one he did. Ever since that night, Twinkies have always been in stock and on display at Five Brothers, and though I’ve never purchased another one, every time I come in the store, he shouts, “Hey, Twinkie!”
During our brief but frequent conversations over the past 51 months, I learned that my favorite cashier is not one of the namesake five brothers. Scandalous, I know. So I call him Cousin.
When I travel for weeks at a time, Cousin and his colleagues notice. “I haven’t seen you in a while, Twinkie,” he asks as I wait for my grilled cheese. “Where have you been?”
Last night, I paid for my pepper jack grilled cheese on wheat like always, and then it struck me that I should probably tell Cousin that my time in NYC was winding down so he wouldn’t wonder what happened to me.
“Cousin, I’ve got bad news,” I said, trying to be lighthearted. His face fell.
“Shut up, you’re moving.” He guessed right away. “I can’t believe it. The end of an era.”
He didn’t ask me where I was going. He just bagged up my sandwich and sour cream and onion chips and said solemnly, “$5.”
“I’ll come say goodbye before I go, “ I said, and he nodded.
As soon as I was out the door, the tears started to roll. When I moved to New York, I expected everyone to be hard and cold and mean. Now that I’m leaving, I can honestly say New York is as friendly a place as any I’ve ever visited. Sure, New Yorkers don’t make eye contact and they might run you over if you’re walking too slowly, but when it comes down to brass tacks, New Yorkers have always had my back.
From Cousin and his cohorts at Five Brothers, to the street vendor who makes my chicken pita, to the sweet lady at the Mexican restaurant on 9th who laughs when I order tostadas in my affected español, to the karaoke leader at Mr. Biggs who calls me Trouble, to the precious old Chinese man who picks up my laundry and doesn’t understand a word I say, to the guys who play dominoes right next door to my apartment and always wave at me when I'm on the way home from work, to my toothless, loveable superintendent… there are so many lovely characters in this town who have made my time here an adventure every single day.
I have a lot to be thankful for and tonight, I’m just thankful for New York.

This makes me so sad, too! As much as I was ready to be OUT of NYC, I had similar sentiments in my final days there. I can't believe your final days are here!!!

You'll be back. You won't be able to stay away, BAA!

New york will miss you too